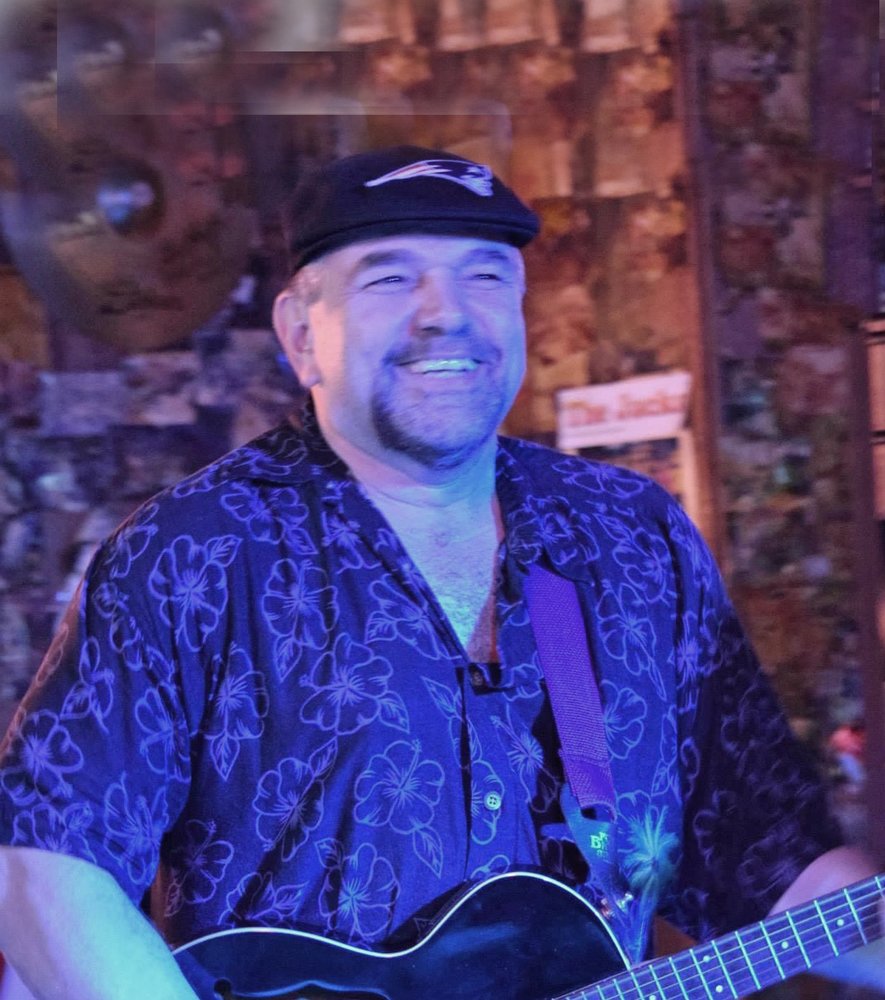 Vincent Guy Capozzi, a plasterer by day and musician by night, passed away from Covid-19  on Saturday July 31, 2021.  He was just 62 years old.  Vinny was one of six  children born to Vincent and Jennie Capozzi.  He grew up in Burlington and was a graduate of Burlington High School Class of 1977.  Between the Capozzi and Mazza families, he had a massive family and a strong Italian bond with all his aunts, uncles, and cousins.  There were cookouts, family celebrations, holidays and extremely competitive card games.  He owned his own business, Vin Capozzi Plastering, doing commercial and residential plastering and drywall in the Burlington area, Cape Cod, and Florida.  As a hobby, he also fixed, restored, and sold antique and classic cars.  These jobs helped support him to follow his real passion of music.  From an early age, he loved music and wanted to be in a band.  He and his friends jammed in his parent’s cellar trying to hone their skills and talk of their dreams of performing on stage.  Over the years, he played bass guitar and did some vocals for a number of bands including the “Syndicate.”  He founded his current band, “Girl on Fire” and played all over the Daytona Beach area.  Rock and Roll music was his thing with tunes from Led Zeppelin, Pink Floyd, Alabama, etc..  He loved performing, bringing joy and excitement to the crowd, and giving homage to musicians he revered.   On stage, he often brandished a hat with his beloved Patriots logo.  He was a mentor and friend to countless other musicians.  On Sunday, August 22, 2021, his bandmates and musician friends will be hosting a “Celebration of Life Through Music” honoring Vinny at the Dog House Bar and Grill in Port Orange, Florida.  There are numerous tributes to Vinny and videos of Vinny playing being shared on the “Girls on Fire” Facebook page, https://www.facebook.com/girlonfiredaytonabeach/ .

Vinny was someone everyone couldn’t help but remember.  One word that could never be used to describe Vinny was “bashful.” He was big in stature, the loudest, and the most engaging person in the room.  His laugh was distinct and infectious.  He was bubbly, entertaining, and fun.  He was that fun uncle all the kids gravitated to, the person who you met for the first time and he you were lifelong friends, the one who made you laugh, smile, and feel special.  He was never all about his work or music.  He was an avid New England sports fan and supported his Boston teams, especially the Patriots, even in Florida.  He liked riding a bike, cruising on his trike, a day spent on his boat, afternoon of golf, and sharing a great meal with family and friends.  He was a great brother, uncle, boyfriend, friend, and entertainer and he will be missed but forever remembered.

There will be visiting hours at the Edward V. Sullivan Funeral Home, 43 Winn St., Burlington, MA on Sunday, August 15 from 4-6 p.m. A graveside service will be on Monday, August 16 at 11 a.m. at Chestnut Hill Cemetery, 52 Bedford Street, Burlington.  For obituary, directions, online guest book, and video tribute see www.sullivanfuneralhome.net

Share Your Memory of
Vincent
Upload Your Memory View All Memories
Be the first to upload a memory!
Share A Memory