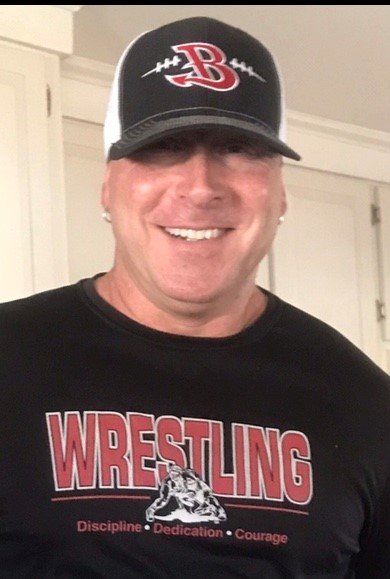 William Victor “Billy” Paige, Jr. a carpenter and President of Burlington Pop Warner passed away after a long battle with pancreatic cancer on Sunday night, August 15, 2021.  He was 44 years old.  Billy was born in Winchester.  He was the son of William and Pamela (Cippollo) Paige.  He grew up in Woburn where he played football and wrestled.  He was a 1995 graduate of Woburn High School.  He then enlisted in the Navy and served from 1995 to 1999.  He held the rank of Engineman 3rd Class and served aboard the USS la Moure County which was a tank transport ship based out of Virginia.  He was the recipient of the Good Conduct Medal, National Defense Service Medal, and the Sea Service Deployment Ribbon with a Bronze Start for his service.

Following his military service, he returned to Woburn and began working in the construction industry.   He spent a number of years working for Pandolfo Construction before switching to Pinnacle Construction.  He mostly did commercial construction which included a wide variety of medical offices, commercial spaces, school projects, car washes, and retail spaces.  His workmanship, attention to detail, and commitment to his company and the customer was second to none.  He was well respected and loved by his coworkers and clients.

Billy was a man that was young at heart, but a much older soul.  His qualities and values were more like those of the World War II Veterans that are fondly remembered as “The Greatest Generation”.  Like them, Billy proudly served his country, was a proud American, and thought about others and their communities first.  He was a father of four wonderful and beautiful daughters.  He would do anything for them.  He worked endless hours to give them a little bit more and supported their passions and interests.  He knew nothing about cheerleading but was a “Cheer Dad” who helped set up for performances.  He coached Pop Warner Football and Burlington Youth wrestling even though he didn’t have any sons.  When Pop Warner Football was at a crossroads and needed a new president, Billy stepped up not for his children’s benefit, but for the youth of Burlington and it was the right thing to do.  He stepped up to become a board member for Eastern MASS Pop Warner as well.  For Billy it was about doing the right thing, giving back, love of sports, and placing others first.  The world would such a better place if everyone had a little of Billy’s commitment, kindness, and mindset.

Billy had a great devotion to his family.  He shared his dad’s passion for collecting and restoring antique and classic hot rods.  He cherished the time spent with his dad in the garage under the hood working together.  He was there for his dad when his health declined.  He was a devoted husband and best friend to his wife Julie for the past 7 years.  They were a team and had a mutual admiration for each other and their needs.   If she saw something on “Pintrest” that sparked her interest, he would look at the pictures, evaluate the task, and get to work recreating the project. He was a special dad to all his daughters.  He wanted them to be happy, be able to follow their dreams, and smothered them with love.  There were family vacations to Disney World and New Hampshire, cheerleading competitions, pageants, and family events.  Even during the last 16 moths of his illness, Billy was more concerned about his family’s wellbeing over his own right up until his passing.  Billy’s passing leaves a huge void in all the hearts of his family and friends as well as the youth sports programs in Burlington.

Billy is survived by his wife Julie (O’Callaghan) Paige, his daughters; Allie, Lindsey, & Monroe Paige and Brooklynn Richardson, his siblings Denise Paige of North Berwick, Maine and Eric Weeks-Paige of Fitchburg, and his mother and father-in-law; John and Gayle O’Callaghan.  He was predeceased by his parents; William and Pamela Paige and his stepchildren; Chase and Kenley Richardson.

Visiting hours will be held at the Edward V. Sullivan Funeral Home, 43 Winn Street, Burlington on Wednesday, August 18 from 4-7pm. Funeral from the Sullivan Funeral Home on Thursday August 19 at 9am. Followed by a Funeral Mass at St. Margaret Church in St. Veronica Parish, www.stveronicama.org, 111 Winn St., Burlington, MA at 10am. Services will conclude with military honors following the mass.  In lieu of flowers, memorials in Billy name may be made to the Billy Paige Children’s College Fund, https://gofund.me/27c82cdd