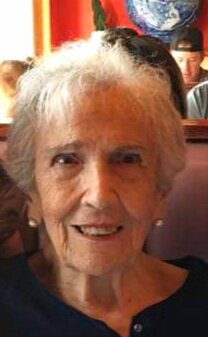 Marie L. (Todaro) Daigle, after enjoying a well lived and well loved life passed away at her home on Wednesday morning, September 29, 2021.  At 95 years old, she was the matriarch to both the Daigle and Todaro Families.  Marie was born in Medford.  Marie was one of three children born to Italian immigrants, Benjamin and Josephine Todaro. She grew up in Medford and worked most of her life in the retail industry.  She worked at Gorin’s Department Store in Woburn for several years before taking a position closer to home at Almy’s.  Marie worked there until the stores closing. She then went to work at Dorothy Ruth Cosmetics in Bedford.  She ended her career working part-time at Rebecca’s Bakery in Burlington.

Marie’s success for living to 95 years of age independently was that she was always in perpetual motion physically and mentally.  She worked a full-time job, was involved in her community, and always made time for her family.  During WW II she was a Red Cross Aid.  She was the cofounder of the Burlington Cooperative Kindergarten in 1962 which was located at the lower level of the United Church of Christ Congregational Church.  She was a member of the Burlington Town Meeting, Burlington Garden Club, and the Council on Aging.  She was a longtime member of the Burlington Son’s of Italy where she served on their board.  She and her husband Lincoln were members of the Red Hot Squares square dancing club.  They danced weekly and took numerous camping trips with the club.  She was an avid Bridge player.  She played at the COA in Burlington and with her friends for over 3 decades.  Marie was a huge Celtics fan and followed her favorite players from team to team. She was seen with “Lucky” at a game when he visited her in a Box Suite.

She loved tending to the flowers and plants around her home and you could find her weeding up until recently.  She was an outstanding cook and had a huge collection of cookbooks that she visited regularly for new recipes.  She was an avid reader and loved romance novels and selections from the New York Best Seller List.  Never one to mince words, Marie was sharp as a tack right up until her passing.  She constantly had her television on the stock market ticker right up to last week.

Marie was a woman devoted to her family.  She and her husband Lincoln were a wonderful couple.  They enjoyed many activities together, socializing with neighbors, going to socials at the Knights of Columbus, and Son’s of Italy events, card games, camping trips, family and army reunions.  They weren’t the tallest couple on the dance floor, but likely the most graceful.  She was a loving, nurturing, and supportive mom to her three children.  She created lifelong memories with them at home and at their summer home on Cape Cod, which she co-owned with her brother Sal.  Marie loved the ocean, seafood and swimming.  Beach time with the grandkids was a favorite pastime. She was there to celebrate their successes and there to comfort them during their missteps and disappointments.  She was the fun, caring and devoted grandmother of seven.  She cared for almost all of them when their parents were off at work.  She cooked their favorite meals, told them stories, engaged their many interests and was a pillar of support.  Marie always saw the good in others.  Words of wisdom she often shared with her family were “Remember the good, forget the bad.”  She was a remarkable woman, full of energy and love, that held a special place in the hearts of all her family, friends and neighbors.

Visiting hours will be held at the Edward V. Sullivan Funeral Home, 43 Winn St., Burlington on Tuesday, October 5 from 4 to 7pm. Funeral from the Sullivan Funeral Home on Wednesday, October 6 at 9am, followed by a Mass of Christian Burial at St. Margaret Church in St. Veronica Parish, www.stveronicama.org, 111 Winn Street, Burlington, MA at 10am. Services will conclude with a burial in Oak Grove cemetery in Medford.

Share Your Memory of
Marie
Upload Your Memory View All Memories
Be the first to upload a memory!