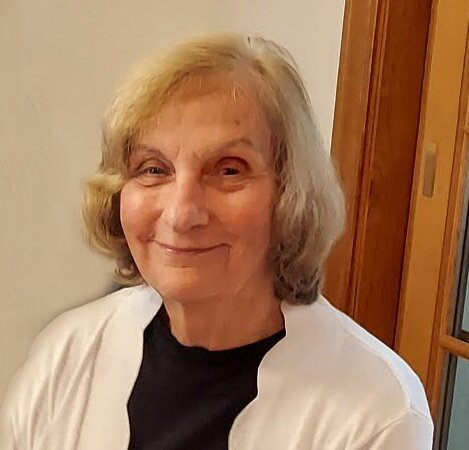 Joan (Rafferty) Bemis, longtime resident of Burlington, passed away peacefully after a brief and courageous bout with cancer on Saturday, October 9th, 2021. She was surrounded by her loving family at her home in Dover, NH.

Joan was married for 65 years to her beloved husband Richard E. before his passing in 2019. She raised 8 children: Marilyn Bemis of Dennis, Patricia Cahill of Marlborough, Michael Bemis & his wife Annmarie of Red Hook, NY, Karen Wyatt & her companion John Dooley of Haverhill, Kathy Jencso & her husband Steve of Dover, NH, Stephen Bemis & his wife Marianne of Medway, Mark Bemis & his wife Kathleen of Roswell, GA, the late Richard E. Bemis, Jr. and his surviving wife Denise Jacquard of Atkinson, NH. She is also survived by 16 grandchildren and 4 great grandchildren.

Joan was born in Stoneham to the late James and Lillian Rafferty and was the sister of Kevin of Virginia and the late Mary Yianacopolus and James Rafferty. Joan and Dick married at St. Patrick’s in Stoneham in 1954 after graduating high school and lived in Stoneham and Malden for a time. They settled in Burlington in 1962 and knew they had found a place to call home.  They provided a warm and loving household, always there to give helpful advice and assist with anything their children needed. After her children had grown Joan began a career as an Administrative Assistant and enjoyed finding a new role in her life.

Joan had a passion for music, the arts, and her community. She loved attending plays and musicals, especially when her grandchildren were in them! She also remained an active member of the Burlington Council of Aging for many years. There she formed new but deep friendships, spending precious time with them doing everything from attending shows and lectures to singing in the choir. She dearly treasured the friends she made throughout her life and the time she spent with them.

Joan always made time to watch her favorite sports, from the pro leagues to her grandkids’ teams.  She loved all the New England teams, most especially the Red Sox and the Patriots. She even had the perfect impression of Bill Belichick! When the games weren’t on, she would enjoy a beautiful day at the ocean, listening to the sound of the waves and the excitement of children playing in the sand. Her warm smile always graced her family and friends, and even perfect strangers as she spent afternoons people-watching in the park.

A visitation will be held at the Edward V. Sullivan Funeral Home, 43 Winn St., Burlington (exit 34 off Rt. 128/95, Woburn side) on Friday, October 15th from 4 p.m. to 7 p.m. A Mass of Christian Burial will be held at St. Margaret’s Church in St. Veronica Parish, www.stveronicama.org, 111 Winn St., Burlington, on Saturday, October 16th at 10 a.m. Services will conclude with Burial in Pine Haven Cemetery, Burlington. In lieu of flowers, memorials in Joan’s name may be made to the American Cancer Society, www.cancer.org. For directions, obituary & online guestbook see www.sullivanfuneralhome.net.

Share Your Memory of
Joan
Upload Your Memory View All Memories
Be the first to upload a memory!
Share A Memory