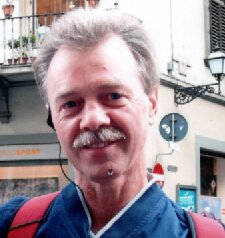 Click on this link to view the Funeral Services Sunday, October 24th at Noon

Rolland J. Blanc passed away unexpectedly at his home on Saturday, October 16, 2021.  The beloved husband of Aileen Blanc, née Casaletto, he was 68 years old. Rolland was born, raised, and educated in Saint-Emile, a rural community in Quebec Canada. He was one of seven children born to the late Omer and Rose-Alba Blanc. It was while working at a restaurant owned by Aileen’s uncle that he would meet a young woman from Winthrop, MA named Aileen Casaletto, who was on vacation visiting family.

It was love at first sight. Despite the language barriers they had a wonderful three-year courtship traveling back and forth to each other’s countries while Aileen pursued her nursing degree. They married in Winthrop, MA on October 20, 1974 and settled in Montreal. It was while living in Canada that both of their children, Chris and Danielle, were born. In 1983 Rolland and Aileen decided to move back to Masschsuetts to be closer to Aileen’s family. They settled in Burlington in 1984 where they have lived ever since.

Rolland had a career in the transportation industry and was a member of Teamsters Local 25 for many years working for St. Johnsbury Company.  He spent the last several years in retirement.

Rolland and his family had a great love for his homeland of Canada and made numerous trips there to visit family and vacation.  He would often make trips back to Montréal to attend the jazz festival; always making sure he visited his parents, siblings, nieces and nephews, aunts, uncles and cousins. He was always sure to keep close ties despite the distance.  Rolland and Aileen, who always referred to him as Ronnie, spent many winter vacations at Mont-Tremblant enjoying their favorite winter sports with the children and their friends. Fond memories were made on the slopes of Mont-Tremblant, snowmobiling, sledding and under the nightlights of the many outdoor ice rinks where they skated and played ice hockey. Summers were often spent at Lac-des-Plages, Cape Cod or in the New Hampshire lakes region. More recently, Rolland enjoyed spending time with with his family and grandchildren in Stowe, VT and Chile.

Anyone who knew Rolland knew he was a classic car enthusiast. He enjoyed collecting and tinkering with them any chance he got. He loved working on engines and was a jack of all trades with an affinity for anything mechanical. Rolland was a people person who could strike up a conversation with anyone he met. He was kind, friendly and had a unique personality. He left an impression on everyone he met. Rolland had a great love for animals and it wasn’t unusual for him to bring an injured animal home so he could nurse it back to health.

Rolland was an amazing dad and husband. He would sacrifice everything and anything for Aileen and the children.  If one of the kids called needing assistance with something, he would drop whatever he was doing and immediately be there for them. His three grandchildren; Iko, Eva and Carolina, who named him Boon, brought him immense joy. They will miss his playfulness, his silliness, the way he made them feel safe and loved and most off all his funny French-Canadian accent.

Rolland’s sudden death leaves his family with much sadness; with him he took a piece of their hearts. He will be in their thoughts forever; greatly missed but never forgotten.

Rolland is survived by his wife Aileen Blanc, née Casaletto, daughter Danielle Blanc-Aguirre and her husband Alvaro of Winchester and son Christopher and his wife Mackenzie of Burlington. He was the proud grandfather of Francisco “Iko”, Eva and Carolina Aguirre. Brother-in-law of Kerry and Lenny Ford, John and Linda Casaletto and Bobby and Grace Casaletto. Brother of Bernard, Marcel, Garry, Johanne, Stephen and Christian Blanc, all of Canada. Uncle to many nieces and nephews. Son-in-law of Aileen Casaletto of Burlington. Visiting hours will be held at the Edward V Sullivan Funeral Home, 43 Winn St., BURLINGTON on Saturday, October 23 from 3:30 to 6:30.  Funeral Services will be held at the Funeral Home on Sunday at noon. Burial to follow in Pine Haven Cemetery, Burlington. In lieu of flowers memorials in Rolland’s name may be made to Toys for Tots www.toysfortots.org

Share Your Memory of
Rolland
Upload Your Memory View All Memories
Be the first to upload a memory!
Share A Memory