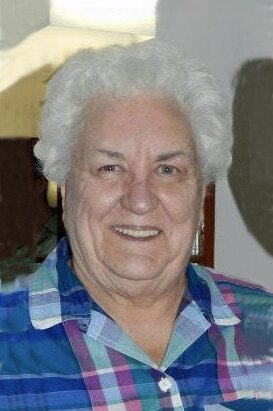 Carole Ann Kurowski Powers, 85, died on November 24 at her home in Burlington. She was the beloved wife of the late Edward “Budgie” Powers and the loving mother of Edward “Teddy” Powers of Dracut, Colleen Powers of Burlington, and the late Cheryl Powers.

She was the mother-in-law of Dr. Katherine Powers of Chelmsford and daughter of the late Anne (Mulkern) Kurowski and Chester Kurowski.

Carole grew up in the Charlestown neighborhood of Boston, where her husband also grew up. She was an alumna of Cheverus School in Malden.

Because she was an only child, Carole especially enjoyed being an aunt to the 25 nieces and nephews who came into her life through Budgie’s many siblings. In turn, they appreciated her keen sense of humor and contagious, boisterous laugh.

Carole made friends easily throughout her life. According to her daughter Colleen, she was “a friend to all and full of advice – wanted or not.” In recent years, she would meet friends on Friday nights at the local Bickford’s to listen to the music of Mossie Coughlin (a.k.a. “Irish Mossie”). She had a lifelong appreciation of Irish music.

Visiting hours will be held at the Edward V Sullivan Funeral Home, 43 Winn St., Burlington on Monday, Nov. 29 from 4-7 p.m.  Funeral from the Sullivan Funeral Home on Tuesday Nov. 30 at 9 a.m.  Followed by a Mass of Christian Burial at St. Margaret Church in St. Veronica Parish, www.stveronicama.org, 111 Winn St., Burlington at 10 a.m.  Services will conclude with burial in Holy Cross Cemetery, Malden www.sullivanfuneralhome.net

Share Your Memory of
Carole
Upload Your Memory View All Memories
Be the first to upload a memory!
Share A Memory