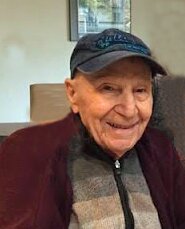 Albert Peter Dellanno, a veteran of World War II, passed away at the Lahey Hospital & Medical Center on Tuesday, December 28, 2021.  The beloved husband of the late Margaret (Bombino) he was 95 years old.

Albert was born in Somerville. He was the son of Italian immigrants the late Luigi and Erasmia Dellanno.   Albert was raised in Cambridge and Somerville.  He attended Suffolk University in the evenings receiving his bachelor’s degree. Albert was a veteran the United States Navy serving his country from 1944 – 1946.  He was the recipient of the World War II Victory Medal and the America Area Medal.  Albert went on to have a successful career as a Chemist working for New England Nuclear/Dupont for almost 30 years.

Albert was also a very handy person.  He wasn’t afraid to tackle any project.  He was a Chemist by day and at night he worked as a contractor, painter, and a mason. During his retirement years he worked his dream job alongside his two sons, Robert and Richard and their company.  He worked with them installing vinyl siding for over 25 years.  It wasn’t about the money it was about the comradery and the bonding time with Robert and Richard.  Albert cherished the time he spent working with his sons, their daily lunches together and just working side by side daily.

Albert was the beloved husband of the late (Margaret) Bombino who passed away in 1999.  He was the proud father of Robert of Burlington and his wife Pamela of Billerica and Richard & his wife Dianne of Wilmington.  Albert was the loving grandfather of Ashley Moulison & her husband Steve of Nashua, NH and Marisa Ferguson & her husband Michael of Billerica. Great grandfather of Jaxson & Rylee Moulaison and Mila Ferguson. Brother of the late Mary Laberinto, Cosmo, Joseph, Dominic and Vincent Dellanno. Funeral Services were private. In lieu of flowers memorials in Albert’s name may be made to St. Jude Children’s Research Hospital www.stjude.org

Share Your Memory of
Albert
Upload Your Memory View All Memories
Be the first to upload a memory!
Share A Memory