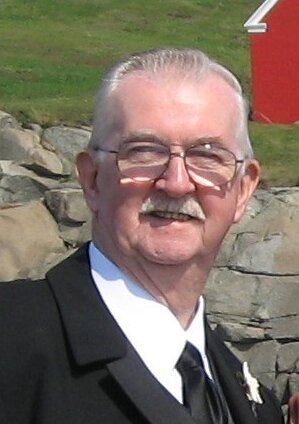 Arthur was a people person and a facilitator.  He was the type of person who easily made friends and acquaintances along the way.  Even though he was from Irish ancestry, he was intensely involved in the Woburn Sons of Italy.  He served as president and district deputy and was involved in many facets of the club.  He enjoyed fundraising socials and especially playing Santa at the children’s Christmas party for many years.  He also enjoyed bowling and bowled in many leagues over his lifetime and finally put away his bowling shoes at the age of 86.  He was an avid golfer and saltwater fisherman.  He was an ardent reader and had quite a diverse interest in genres from biography, history, mystery, to crime novels.  He traveled to Italy, England, Germany, and Switzerland over the years.  But his favorite destination was Disney World, which he visited 18 times.  He loved everything about it from the rides, shows, architecture, characters, and joy you felt walking through the parks and attractions.  His favorite was Space Mountain and the Haunted Mansion, which had to be done as close to midnight was possible!  His grandchildren even referred to his van as the “monorail.”  He had a great sense of humor and was an exceptional storyteller.  In his younger days he was the life of the party and quite the dancer.  In his later years, he enjoyed time spent with his family and especially his grandchildren and great-grandchildren.

Visiting hours will be held at the Edward V. Sullivan Funeral Home, 43 Winn Street, BURLINGTON on Wednesday, January 5th from 10 – 11:30 a.m.  Followed by a Mass of Christian Burial at St. Barbara’s Church, 138 Cambridge Road, Woburn at noon www.woburncatholic.org  Burial to follow in Woodbrook Cemetery, Woburn.  In lieu of flowers, a memorial in Arthur’s name may be made to St. Jude Children’s Research Hospital www.stjude.org or the charity of your choice.

Share Your Memory of
Arthur
Upload Your Memory View All Memories
Be the first to upload a memory!
Share A Memory