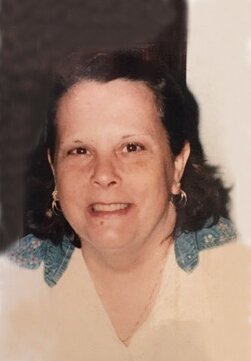 Clicking on  the link (above) will bring you to our facebook page (sign-in not required) to view a live-stream of the funeral service.

Roberta C. (Howard) Manfredi, passed away at the Lahey Hospital & Medical Center on Wednesday, January 5, 2022.  The beloved wife of Natale A. Manfredi, she was 75 years old.   Roberta was born and raised in Cambridge.  She would meet her future husband Natale through a mutual family member’s wedding when they were teenagers.  They married on November 30, 1963.   During their early years of their marriage, they lived in Cambridge before settling in Burlington in 1969.

Roberta worked as a Special Police Officer, Store Security, for Jordan Marsh and Lord & Taylor in Burlington for over 20 years   She would work undercover and authorized to carry a police badge and handcuffs.  Roberta found her job very rewarding.  In her late 30’s Roberta decided that she wanted to further her education. She got her GED and went on to receive her Paralegal Certificate at Middlesex Community College with Honors.  It was a proud day for Roberta and her family when she graduated!  Roberta was quite creative and artistic. She frequently made delicious meals and desserts, especially delighting us all at the holidays. She also arranged beautiful floral arrangements, painted and did ceramics. We are all honored to have some of her beautiful pieces to help keep her memory alive.

As a young family, they enjoyed taking day trips throughout New England.  Roberta and Natale would think nothing of piling the kids in the station wagon and drive to the Cape or White Mountains for the day.  Later in life, she loved her grandchildren dearly and enjoyed spoiling them with gifts through the years. Lastly, Roberta loved her cherished animals throughout the years.  Currently, she is leaving behind her 15 1/2 year old poodle, Lola. They were together 24/7.  This past year the Manfredi family shared some special times together.  They were blessed to all be together for the first time in many years for Thanksgiving. They enjoyed a wonderful day at her daughter Angela’s home.  In November, Roberta and Natale had a special evening together at the Café Escadrille as they celebrated their 58th wedding anniversary.

Roberta was the beloved wife of Natale Manfredi.  She was the loving mother of Angela Hewett & her husband Stephen of Salem, NH, Kristin Manfredi of Burlington, and the late Robert Manfredi.  Proud grandmother of Branden Stanton & his wife Christy, Brian Hewett, Renae Hewett and Shane Manfredi.   Sister of Cathy McKinley of ME.  Sister in-law to Phyllis and Peter Bicchieri and Vincent and Linda Manfredi. Aunt to many nieces and nephews. Funeral Services will be private.