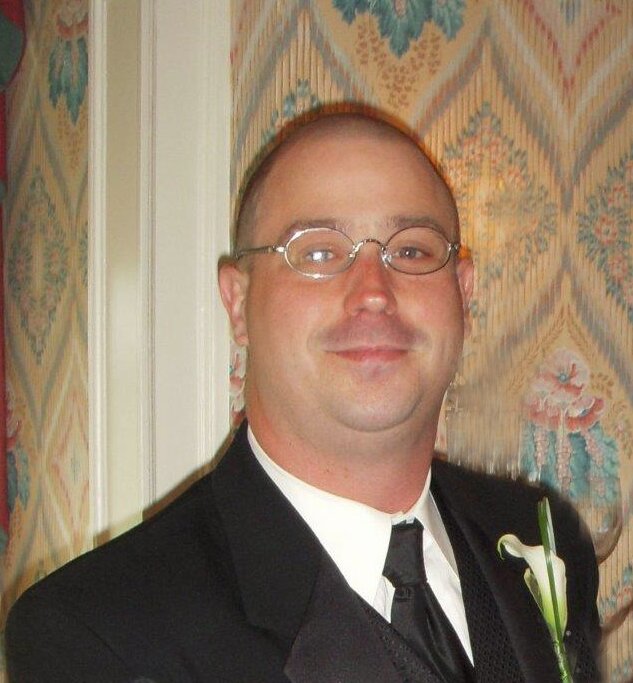 Link to live-stream of the Funeral Mass

The link (above) will connect you to the St Charles web-page.  A live-stream of the funeral mass will begin a few minutes before 10am on Wednesday Jan 19th.

John Thomas Trowbridge, Sr., a Human Resources Director for Paychex, Inc., passed away suddenly at the age of 44 on Sunday morning, January 9, 2022. John was born in Boston to Christian & Catherine Trowbridge, Sr., and grew up in Burlington, Massachusetts. He attended St. Agnes Elementary School and graduated from Austin Preparatory School in 1995. John then earned his bachelor’s degree from Fitchburg State University in 1999.

When he was young, John was quite the gymnast, competing in competitions as far away as Texas. While growing up, many days were spent as a family in Mattapoisett sailing on his Dad’s boat, the Naiad. There were also many family hiking and camping trips in the White Mountains. John was just as happy spending time with his Mom in the kitchen learning to cook and coming into his own right as a great cook himself as an adult.

John worked for Paychex for 20 years. He began as a Human Resources Generalist and rose to Human Resources Consultant before becoming a Director. He currently had 60 clients whom he assisted with HR, payroll, compliance and benefits services. His tenure made him well-versed and experienced to handle any employment issue. He especially enjoyed interacting with his clients in the Massachusetts area on a one-on-one basis. Paychex and the clients he served have lost a great resource, but more significantly, a great friend.

John met his future wife, Kathleen Phillips, when they were in seventh grade. He finally had the courage to ask her out on a date on the last day of school that year. They have been together ever since. They both went to Fitchburg State and got married in 1999. John & Kathleen settled in Woburn, started their family, and remained best friends. A house fire two years ago resulted in them relocating to Billerica. John & Kathleen loved doing activities together as a family. They especially enjoyed family day trips and weekend trips to New Hampshire, Maine and Vermont, and longer trips to Pennsylvania, Seattle and family beach vacations in South Carolina. They visited Walt Disney World 15 times over their years together and with their children, for John was forever a kid at heart. John also had a strong faith in God that was instilled in him at a young age by his parents and nurtured through his primary and secondary education. John’s faith was shared by Kathleen and formed the strong foundation for their marriage.

As a father, John always made special time for each of his children. He shared a love of baseball with his son JT, as his baseball coach, JT played on various school and travel teams over the years and attended many games near and far. His daughter, Daniella was John’s construction buddy and “little helper”. They attended Home Depot’s monthly classes for the past 7 years learning to use tools and build many small projects like bird houses. He loved attending her dance recitals as well. Some in his family would say that John was the “Instigator of Fun”.  He wouldn’t hesitate throwing a niece, nephew, or even a sibling in the pool or dare them to do something crazy. There were many nights spent sitting around the firepit, roasting marshmallows and talking about a wide variety of topics and sharing stories. John’s sudden passing makes all these times shared with family even more precious and memorable. John’s memory will always bring a smile to those he loved.

Visiting hours will be held at the Edward V. Sullivan Funeral Home, 43 Winn Street, Burlington, MA on Tuesday, January 18 from 4:00 to 7:00 p.m. Funeral will be from the Sullivan Funeral Home on Wednesday, January 19 at 9:00 a.m. followed by a Mass of Christian Burial at St. Charles Catholic Church, 280 Main Street in Woburn at 10:00 a.m. Services will conclude with a burial in Woodbrook Cemetery, Woburn. The family requests that masks be worn at the visitation and funeral Mass.

In lieu of flowers, a GoFundMe account has been established to benefit the family and future education of John’s children: https://www.gofundme.com/f/xsdh8b-help-the-trowbridge-family?qid=14b3f36d02d0347cf0baa6501d83bbda.