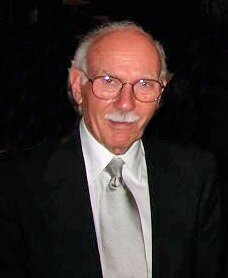 Please share a memory of William to include in a keepsake book for family and friends.
View Tribute Book

William Kay Sullivan, a World War II veteran, passed away at the Lahey Hospital and Medical Center on Wednesday, January 26, 2022. The beloved husband of Joan (Kramer) Sullivan was 94 years old.

Bill was born, raised and educated in Dorchester.  He was one of six children, three born to the late Cornelius and Mary Sullivan and three of the late Cornelius and Jeanette C. Sullivan. He worked at Raytheon in Waltham. Bill served his country in the United States Navy. He was the recipient of the World War II Victory Medal, American Theatre Medal and Asiatic Pacific Theatre Medal.  After the war, he began a career at Trans World Airlines (TWA), including management in the Air Freight Department. He retired after 32 years of service with the airline.  Bill, Joan, and their sons traveled the world on TWA.  They visited England, Ireland, Spain, Hawaii, California, Arizona, Virginia and Bermuda.

Bill was an avid sports fan. He played semi-pro football during his younger years but his passion was baseball.  He loved his Red Sox and felt the highs and lows right along with the team and Red Sox nation. He rejoiced when world championships were ultimately achieved. Bill also enjoyed participating in local candlepin bowling leagues.  He loved a good novel by David Baldacci or Michael Conley, two of his favorite authors.  He was also a classic movie buff and enjoyed original mystery/suspense films.  Bill loved a night out dancing with his wife Joan.  He was a loving and supportive father to his two sons Wayne and Evan and very proud of their accomplishments.  When his sons were younger, he enjoyed attending their baseball, football, lacrosse and basketball games.

Bill was the beloved husband of Joan (Kramer) and loving father of Wayne K. Sullivan of Burlington and Evan W. Sullivan of St. Petersburg, FL.  Bill was the brother of Jeannie Kelly and her husband John of Falmouth, Sister Barbara Sullivan of KY and the late C. Joseph, Robert, and John Sullivan.  Bill is also survived by many loving nieces and nephews.  Funeral services were private. In lieu of flowers, memorials in Bill’s name may be made to a charity of choice.