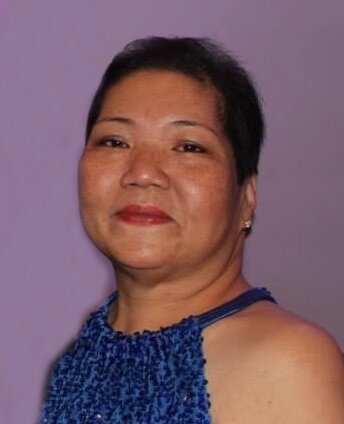 Clicking on the link (above) will bring you to our facebook page (sign-in is NOT required).  A live-stream of the funeral mass will begin shortly before 10am on Monday, Feb. 14.

MariaGina (Cruz) Rippin passed way at the Sawtelle Family Hospice House following a lengthy illness on February 7, 2022, at the age of 57. Gina was the beloved wife of Samuel of Burlington and proud mother of Nathaniel of Providence, RI, and Aaron of Burlington.

Gina was born in the Philippines on June 23, 1964.  Gina immigrated to the U.S. with her parents just shy of her 21st birthday in 1985. Within a few months of their arrival in Ohio, she became a nursing assistant at a long-term care facility and even took on a second job in retail to help her parents make ends meet. Through yet another side job as a seamstress, Gina was introduced by a mutual friend to Sam Rippin. The couple went on their first date on June 17, 1986 – a date she continued to celebrate even after they were married on June 10, 1990.

Gina earned her LPN degree from Central School of Practical Nursing in Cleveland before she and Sam relocated to Burlington, Massachusetts. They welcomed their two sons, Nathaniel, and Aaron, who both attended the Burlington Public Schools, Iskwelahang Pilipino in Bedford, and earned the rank of Eagle Scout. Gina had longed to be a mother and imparted good values and a strong work ethic in her boys, along with deep love.  Gina was a strong-willed woman and wanted her sons to be the best they could be.

Gina was also a loyal friend who cherished her friendships dating back to her childhood in the Philippines, and the Rippins all felt privileged to help support her family members who continue to live there. She similarly valued the relationships she developed with her fellow nursing school students and administrators who remained among the wide circle of family and honorary family members whom she kept close to her heart.

In fact, part of being “uniquely Gina” was her unquestioning generosity. She was outright eager to help anyone less fortunate through church, the local food pantry and elsewhere, and she was a legendary shopper and gift-giver who was admired as much for the thoughtfulness as the frequency of her gestures.

Gina opened the doors of her home as she did her heart, hosting annual Thanksgiving dinners for 50 and twice as many at Christmas with dozens of carolers and musicians from Iskwelahang Pilipino. She was indeed a social dynamo as well as a force for justice, a talented cook of both American and Filipino delicacies and the most popular person in any room who was sought for conversation, advice, and many laughs.

Throughout her lifetime, Gina was a natural and compassionate caregiver to her family, her patients, and her fellow health care professionals in the assisted living facilities in which she dedicated her career. A deeply devoted Catholic, Gina believed that health care was a calling to which she remained proudly committed and fiercely loyal.

Gina earned her RN from the Lawrence Memorial/Regis College Nursing Program in 1993. Despite her own unsurpassed clinical knowledge, she held herself to the same high standards as her colleagues and bosses alike while progressing from staff nurse to unit manager, floor leader and assistant director of nursing.  Gina worked at several Nursing Homes and Rehabilitation facilities and retired from Wingate at Andover.

A staunch advocate for the highest quality patient care, Gina did not hesitate to speak out at any risk if something seemed wrong. When she required hospitalization, she then advocated for herself while using her own chronic illness as teaching opportunities for nursing assistants and other professionals in whom she recognized a shared passion for health care.

A scholarship will be awarded in Gina’s name and considerable legacy. As a first-generation college student who learned English as a second language, she had enduring empathy for others sacrificing to make their own professional dreams a reality and an active interest in diversifying the healthcare profession to be more representative of the broader patient population.

Gina’s moral compass guided her to do not what was easy, but what was right. It is the family's desire that through the MariaGina Cruz Rippin, RN Memorial Scholarship, deserving recipients will be inspired by her example to become the best version of themselves, so they may best serve others.

Gina was the beloved wife of Samuel Rippin.  She was the loving and proud mother of Nathaniel of Providence, RI, and Aaron of Burlington.   Daughter of Ernesto & Lourdes Cruz of OH.  Sister of Nona Cruz & her husband Omeng of the Philippines.  Daughter-in-law of Jermone Rippin & the late Sylvia of OH.  Sister-in-law of Jacqueline Rippin of OH.  Aunt of Rizza Capiral, Nina Padero & Fiel Balansag.  Visiting hours will be held at the Edward V Sullivan Funeral Home, 43 Winn St., BURLINGTON on Sunday, Feb. 13 from 1:00pm. – 4:00pm.   Funeral from the Funeral Home on Monday, Feb. 14 at 9am.  Followed by a Mass of Christian Burial at St. Malachy Church, in St. Veronica Parish, 99 Bedford St., Burlington at 10am.  Burial will be private.  In lieu of flowers, memorials in Gina’s name may be made to the MariaGina Cruz Rippin, RN Memorial Scholarship at Regis College: https://alumni.regiscollege.edu/MGRscholarship

Share Your Memory of
MariaGina
Upload Your Memory View All Memories
Be the first to upload a memory!
Share A Memory