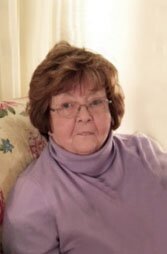 Please share a memory of Ruthann to include in a keepsake book for family and friends.
View Tribute Book

Covino, Ruthann (Faulhefer) – a 48 year resident of Burlington, passed peacefully with her family by her side at the age of 77 on April 12th.

After graduating from Medford High School, Ruthann worked as a service administrator with Balco in Medford, MA. She and Ernie lived a few years in Medford after their wedding before moving to Burlington in 1974, where they established their family’s roots. They proudly raised three children and created a warm safe home for their family. Once all of their children started school, Ruthann began working again in the medical profession becoming an integral part of the office operations as a medical secretary at various practices including Woburn Pediatrics, Carlton Willard Village, and Dr. Radvany of Winchester. In later years, she used her knowledge of working with insurance companies to assist seniors with the non-profit organization Minuteman Senior Services and later on as a SHINE Counselor in Burlington. Ruthann was a proud resident of Burlington and participated in many civic activities of note serving as School Committee member and chair, Town Meeting representative, Wildwood Elementary School PTO, Marshall Simonds Middle School PTO, Burlington High School PTO, Burlington Junior Women’s Club officer and representative to the State Federation, Fourth of July Parade Committee co-chairman, Town Election poll clerk, and a member of numerous committees including the B-Line and Disability Access. She was fiercely loyal and did not hesitate to lend a hand, a shoulder to lean on, and advocate for those who did not have a voice to be heard. Happiest with a house full of family and friends, Ruthann lived a grateful life filled with lots of love and laughter.

Visiting hours will be held at the Edward V Sullivan Funeral Home, 43 Winn St., Burlington on Tuesday, April 19 from 4:00–7:30pm.  Funeral from the Funeral Home on Wednesday, April 20 at 9am. Followed by a Mass of Christian Burial at St. Malachy Church, in St. Veronica Parish, at 10am.  Burial to follow in Pine Haven Cemetery, Burlington.

In lieu of flowers, memorials in Ruthann’s name may be made to People Helping People Burlington Food Pantry, PO Box 343, Burlington, MA 01803 www.peoplehelpingpeopleinc.org

Share Your Memory of
Ruthann
Upload Your Memory View All Memories
Be the first to upload a memory!
Share A Memory