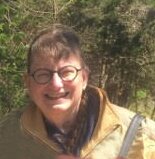 Barbara Bristow of Ipswich, MA passed away on May 3, 2022. Born in Connecticut, she grew up in Absecon, NJ and graduated from Holy Spirit High School.  She received her Bachelor’s degree in History from Douglass College (Rutgers University) and her Master of Library Science (MLS) degree from the Library School of Rutgers University. She worked for H.W. Wilson Co. in New York City; she considered it a dream job – she got paid to read for a living, and she got a chance to live in the “Big City”. She even got to work in Ireland for a short period. Following an acquisition, she continued on with the new company, EBSCO Information Services in various roles, finally as a Semantic Enrichment Specialist. She recently reached her 40-year anniversary with the two companies combined. Despite the change requiring relocation to Ipswich, MA, she was content with the move, considering herself a “small-town girl at heart”.

Although she worked in Information Services, Barbara maintained her interest in history, particularly medieval history, and spent several vacations playing in the mud at archaeological digs in Britain. Barbara was a lifelong voracious reader, who could devour a book in very short order. She was an avid stitcher, completing countless cross-stitch, embroidery, crochet, and knitting projects. She attended various gatherings related to her stitching, including the MetroStitchers group and taking courses offered by the Royal School of Needlework. She also took great pleasure in her feline companions, Morgana and Nimue.

Barbara was pre-deceased by her parents Edgar C. Bristow III and Patricia Booye Bristow, and her sister Carol. She is survived by her brother Charles and his wife Diane Byers of Bloomington, IL; cousins Bill (Joan) Wood and Peggy (Barry) Owen and their children. She is also survived by the many friends she met through life, work, social media, and internet list-servs, who were very important to her – especially her life-long friend Charlotte (Don) Wells.