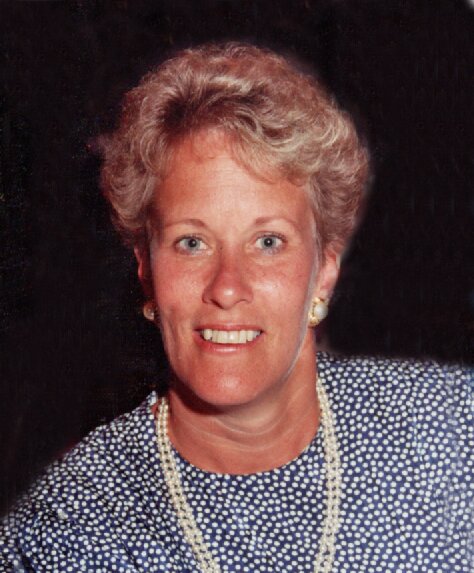 Get Directions
Saturday
21
May

Miriam “Mimi” R. (Robbins) Kelly passed after a long battle with Alzheimer’s Disease on Tuesday morning, May 17, 2022.  She was 78 years old. Mimi was born in Cazenovia, New York.  She was one of four children born to Marguerite and Richard Robbins, Jr.  She grew up in North Falmouth, MA where she excelled in sports, won many swimming trophies, and enjoyed go boating with family and friends  in her father’s boat “The Mimi”.   She was co-captain of the girls’ varsity basketball team at Lawrence High School in Falmouth.  Her nickname was “Gunner” for her pinpoint accuracy and scoring ability.  She went on to graduate from Lasell Junior College in Newton.  During her college years, she worked as a waitress at the North Falmouth Diner in North Falmouth.  It was there that she met a Boston College student named Jack Kelly whose summer job on the Cape was a Hood milkman and he regularly had dinner at Mimi’s diner. Jack always said that it was the best job he ever had because that was how he met Mimi.  Mimi graduated in 1963 and the couple were married in 1964.  They lived in Boston, Hartford CT, and North Plainfield, NJ before settling in their forever home in Burlington in February of 1969.

Mimi lived a very active life until just a few years ago.  She managed Racquetball International in Burlington for 10 years and then spent over 25 years as an office manager at Woburn Recycling.  She continued competing in sports.  She played softball with women who were younger than her own children, volleyball, and tennis.  Where she had the most success was in the sport of racquetball.  She and her doubles partner, Pat Mignon, were the 1981 Senior Doubles Champions for the State of Massachusetts and then went on to take first place in the National Women’s Senior Doubles at the American Amateur Racquetball Association Championship Tournament. She always had that competitive spirit whether it came to a game of bridge with the cousins or campaigning for her husband and others in Burlington politics.  She was a member of the Burlington Democratic Committee and the Knit Wits at the Burlington Council on Aging.

Mimi was a woman devoted to her family.  Her milkman Cape Cod romance became her lawyer life partner.  They shared their passions and raising their children.  They traveled all across Europe from Ireland to Poland at a time when they had to travel past the Berlin Wall through East Germany. They saw plays in London including Les Miserables, the Folies Bergere in Paris as well as visiting Scotland, Netherlands, Spain, Portugal, Switzerland, Austria, Hungary, the Czech Republic, Slovakia and a few other small countries. Jack took on the role of full-time caregiver for Mimi as her illness progressed and lovingly cared for at home until she passed. She was a loving, supportive, and encouraging mother to her children.  She was a rock for her family when her daughter, Robin, battled cancer in high school.  She was so proud of each one of her children for their accomplishments and loved each one with her whole being.  She was so proud of her grandchildren and cherished every moment with them.  She felt blessed to hold them as babies and to watch them as they grew up and became adults.   She was happy to have a visit from her 6-month-old great grandchild the day before she passed. The Buckley Clan (on Jack’s mother’s side) holds quinquennial Family Reunions and Mimi always joined in organizing the reunion with her multitude of new  cousins with whom she became very close.  She was also a very good friend to many and will be sadly missed by all.

Visiting hours will be held at the Edward V. Sullivan Funeral Home, 43 Winn Street, Burlington on Friday, May 20 from 4:30 to 7:30 p.m. Funeral services will be held at the Sullivan Funeral Home on Saturday, May 21 at 9:30 a.m. Relatives and friends are respectfully invited.  The interment will be private.  Memorials in Mimi’s name may be made to her favorite charity: St. Judes Children’s Research Hospital at www.stjude.org. For directions, obituary, online guestbook, and video tribute see www.sullivanfuneralhome.net

Share Your Memory of
Mimi
Upload Your Memory View All Memories
Be the first to upload a memory!
Share A Memory