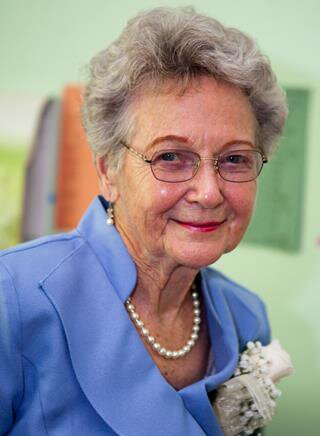 Tena Fiebelkorn, age 94, of Sault Ste Marie, formerly of Caro, passed away at MediLodge of Sault Ste Marie on June 10, 2022. She was born on May 21, 1928, in Windsor, Ontario, the oldest child of the late Gilbert and Margaretha (Rooth) Baas, and immigrated with her family to Royal Oak in 1930. She graduated from Royal Oak High School in 1946 and began working in Detroit.

Tena was united in marriage with John ‘Jack’ Fiebelkorn on March 26, 1949, at the First Baptist Church in Royal Oak. They began their married life at Michigan State College, where Jack was an engineering student and was enrolled in the Air Force ROTC program. Upon his graduation in 1951, Tena and Jack set off on their journey that would take them across the country and back again. As an Air Force wife, Tena kept the household running as their family grew, with four children being born in four different states. Through all the moves, Tena was active in the community, working with school Parent Teacher Associations, as a Girl Scout troop leader, and in a variety of roles with the church. When the children were all in school, she went to work at the Army Logistics Command Center in Cameron Station, VA, providing the organizational skills that were displayed throughout her life. In each place they made home, she enjoyed gardening, cultivating wonderful flower and vegetable gardens with Jack’s assistance. Tena and Jack also enjoyed bowling with various local leagues, and passed the love of bowling to their children.

Following Jack’s retirement, they moved to Caro to establish a fixed based operation for airplane maintenance at the Caro Airport. Both Tena and Jack were ready to settle into a community for the long term, and Caro provided a wonderful place for them to do so. Tena quickly connected with the First Baptist Church and with the Caro Community Hospital Auxiliary, serving in a variety of roles over the years. In 2013, she was recognized as Volunteer of the Year for the East Central Region of the Michigan Association of Healthcare Advocates, with particular acknowledgement of her thirty-three years as treasurer for the Auxiliary.

Tena is survived by four children and their spouses, Diane (Kelly) Harris, of Thousand Oaks, CA; Donna Fiebelkorn, EdD, of Sault Ste Marie; Amy (Larry) Warfield, of Burlington, MA; and Karl (Cheryl) Fiebelkorn, of Corona, AZ. She is also survived by five grandchildren, Libby (Jonathan) Hovey, of Atlanta, GA; Li Kaplan of Grand Rapids; Savannah Fiebelkorn, Karl Fiebelkorn Jr, and Kurtis Fiebelkorn all of Corona, AZ; as well as a number of nieces, nephews, and cousins. In addition to her parents, Tena was preceded in death by her loving husband Jack in 2008; and her brother James Baas and his wife, Alicelane Baas.

Funeral services will be held at 10:00 a.m. on Saturday, June 25, 2022 at the Caro First Baptist Church with Rev. Marc Herron officiating. Burial will follow at a later time. The family will be present to receive friends at the Ransford Collon Funeral Home on Friday from 4:00 p.m. until 8:00 p.m. and on Saturday from 9:00 a.m. until the time of the service at 10:00 a.m. In lieu of flowers, those planning an expression of sympathy may wish to consider memorials contributions to the Caro First Baptist Church or the McLaren Caro Region Auxiliary.

Share Your Memory of
Tena
Upload Your Memory View All Memories
Be the first to upload a memory!
Share A Memory