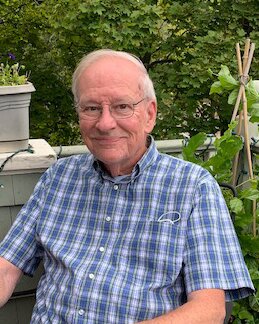 Robert A. Hansen, electrical engineer and entrepreneur, passed away unexpectedly on Saturday, June 18, 2022. He was 81 years old. Robert was born in Hartford Connecticut and grew up in Wethersfield, CT., son of Harold and Helen Hansen. He was a graduate of Wethersfield High School and then Worcester Polytechnic Institute, earning a B.S. in Electrical Engineering. Later, he would go on to earn a Master’s degree in Electrical Engineering and then his M.B.A. from Northeastern University. He worked with cutting edge and classified technology dealing with gyroscopes and guidance control systems for military applications. He was employed with R.C.A. in Burlington from 1962-1967 followed by then Realtime Tech from 1967-1975, and finally Northrop Grumman from 1975 until his retirement at age 66. In retirement, he co-founded the Phoenix Group with former colleagues and worked on this project until his passing. He worked on the AMRAAM Missiles, drones, Apollo Missions, satellites, and other undisclosed projects. He was an imaginative thinker and an inquisitive problem solver, always working in a quiet and unassuming manner. He loved his work, thoroughly enjoyed tinkering with his business partners, and knew that these endeavors kept his mind sharp.

Outside of work, Robert lived a full life. His home and backyard show the extent of his talents. He enjoyed building cabinetry and shelves, he designed and built a large swimming pool, he made beautiful decks and backyard furniture, including an elevated garden for his Linda. He learned to garden from his father, and grew vegetables, herbs, and flowers. For years he dabbled in making his own wine and beer, even entering his beer in tasting challenges. He was a great cook, loved spicy dishes, and was partial to making elaborate pizzas using his garden harvest for toppings. He also loved to repurpose old wood, and delighted in creating something special out of something cast off.

Robert was utterly devoted to his family. His sixty-year relationship to his beloved wife Linda began at a Halloween dance in high school, and they married in 1962. They settled in Burlington in 1964 to raise their family. Together they enjoyed pleasures both simple and complex. Grilling steak at home made them happy, but so did a two-week cruise through Alaska. Many of their vacations were National Geographic-sponsored trips, and later they would indulge their grandchildren in these nature-focused journeys. The most important times were those spent at home; in the kitchen, working on projects around the house, and caring for their children and later their grandchildren. As a father, he wanted his children Deborah and William to be responsible, to value education and learning, and to work hard to craft rewarding lives for themselves. He was exceptionally involved as a grandfather. He and Linda helped care for Camille and Inés as their parents launched and ran a restaurant. He attended all the events that children cherish - talent shows, plays, recitals, soccer games, and graduations. A quiet man, he found his medium in texting and stayed close to his children and grandchildren in this way. He even would read books they were studying for college classes and had helpful discussions about the material. He was stoic, comical with his dry wit, and extraordinarily helpful. Bob lovingly cared for Linda in her final years.

Robert was the beloved husband of the late Linda (Elsmore) Hansen. He was the loving father of Deborah Hansen of Brookline and William Hansen of Kingston. He was the proud grandfather of Camille de Haro of Chicago and Inés de Haro of Burlington, VT. Brother-in-law of Dennis and Elizabeth Elsmore of Jupiter, FL. Uncle of Victoria Fattoross of SC and Anne Marie Barros of CT.

A memorial service will be held at the Edward V. Sullivan Funeral Home, 43 Winn St., Burlington on Sunday, June 26 at 2 p.m. Relatives and friends are respectfully invited. Memorials in Robert’s name may be made to the Nature Conservancy, www.nature.org, 99 Bedford St., Boston, MA 02111. For obituary, online guestbook, and video tribute see www.sullivanfuneralhome.net

Share Your Memory of
Bob
Upload Your Memory View All Memories
Be the first to upload a memory!
Share A Memory