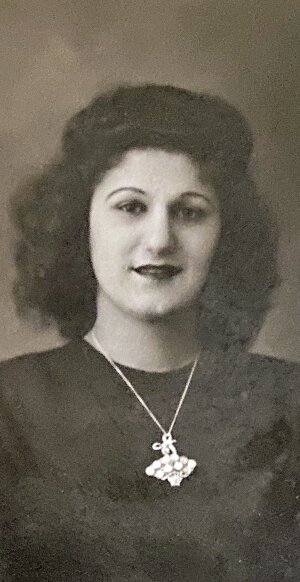 Mary M. Malatesta, a very special woman who always put her family first, passed away after a short illness on Saturday, June 25, 2022. Mary was born and raised in Cambridge.  She was the daughter of Armenian immigrants, Agnes and Oscar Der Boghosian. They were lucky enough to escape the Armenian holocaust and emigrate to The United States of America. She was a graduate of Cambridge Rindge and Latin High School.  She married the love of her life John in 1957 and lived in Wakefield for 2 years before John was transferred to a new position in North Carolina.  Mary didn’t enjoy living away from her family and the couple returned to Massachusetts settling in Burlington in 1972.  It was in Burlington that she raised her two children.  Over the years she worked part time as a customer service representative at Sears and as a salesclerk at Kmart, but she would say her career was that of wife, mother, and “Nana”.    She was so proud of her home; it was always spotless as if she was expecting special company. She learned to cook all John’s favorite Italian dishes, her meatballs being a family favorite.  Her family described her as loving, caring, comforting, and giving the best hugs that made you feel safe and loved.  She was an amazing mom and would do anything for her children.  She loved being “Nana” to her four grandchildren and two great grandchildren.  She was a daytime primary care provider for her first grandson while his parents were working. She described that time as one of her favorite memories. She was ever present at all her children’s and grand children’s activities, sports, school events, and all the special moments of their lives.

There would be many family vacations, with the yearly Old Orchard Beach destination being a favorite. She loved that it included her siblings and their families. Mary loved to gamble. She was a partner in crime with her grandson.  Outside of the home, she was an “Elks wife”. She would work their Bingo events every Sunday night.  She also enjoyed going to Bingo with her girlfriends and trying her luck at Mohegan Sun and Foxwoods Casinos.  She bowled in the Elks bowling league for many years. She will be remembered as a woman filled with love, kindness, and devotion to her family and friends.

Mary lived happily for last three years of her life with her husband, daughter, son-in-law, and family in Tewksbury, MA.

Mary was the beloved wife of John J.  She was the loving mother of John & his wife Alisa of Billerica and Susan Dooley & her husband Timothy of Tewksbury.  Proud grandmother of Arianna and Nicholas Malatesta, Ryan Dooley & his wife Jessica and Derek Dooley & his partner Jacqueline McQuade.  Great grandmother of Owen Dooley and John Davis.  Sister of the late Benjamin Der Boghosian & his late wife Adrian and the late Cy Der Boghosian & his late wife Camille.

In lieu of flowers, memorials in Mary’s name may be made to St. Jude Children’s Research Hospital, 501 St. Jude Place, Memphis, TN 38105 www.stjude.org