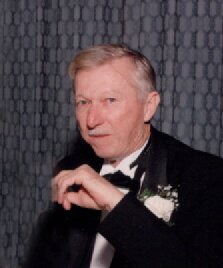 Harry Chamberlin Forson Jr., a 20  year US Navy Veteran, passed away on June 26, 2022 at the age of 92. Harry was born in St. Augustine, Florida to Maude (Wells) and Harry Forson. Harry grew up in St. Augustine, where he was also known as Timmy or Tommy Forson. Harry married his wife Mary E. (Reale) when they were 20 and 19 years old. Mary followed Harry as he was relocated several times for his work with the Navy, until they settled in Woburn, MA in 1965.  They were married for 71 years before Mary passed away in 2020.

Growing up, Harry worked on landing crafts in Florida starting at the young age of 14. When Harry turned 17, his father took him to the US Navy Recruiting Office, where Harry enlisted and began serving his country. Harry served as a boilermaker on the USS Yosemite, a Dixie Class Destroyer Tender, which was tendered in Newport, RI. During this time, the USS Yosemite served as the flagship for the Commander, Destroyers and the US Atlantic Fleet. Harry also served as a boilermaker on the USS Badoeng Strait, a Commencement Bay-Class Escort Carrier, during his time serving in the Korean War. The USS Badoeng Strait served as an anti-submarine warfare ship and part of the blockade-escort force. The USS Badoeng Strait was called upon during the Hungnam Evacuation following the Battle of the Chosin Reservoir, where she helped evacuate over a hundred-thousand military personnel, 17,500 vehicles, 350,000 tons of cargo and 91,000 Korean refugees. “The Miracle of Christmas” The evacuation became known as “The Miracle of Christmas” due to the evacuation’s completion on Christmas Eve 1950.  It has been called “the greatest evacuation movement by sea in US military history." Harry took great pride in his work with the US Navy defending our country.

When Harry returned from duty, he took up several different jobs. Harry served as a commercial contractor, cleaning boilers on large vessels all over the country. Harry was also called upon to provide his expert testimony for asbestos suits from his service in the boiler rooms on the US Naval Carriers he served on. Harry served on custodial staff at Woburn High School. He worked with his son, Wayne, at Woburn Paint & Paper, executing contracts for painting, wall covering, and wallpaper.

A funeral service will be held at Woodbrook Cemetery, Woburn on Friday, July 1st at 12:30pm

Share Your Memory of
Harry
Upload Your Memory View All Memories
Be the first to upload a memory!
Share A Memory