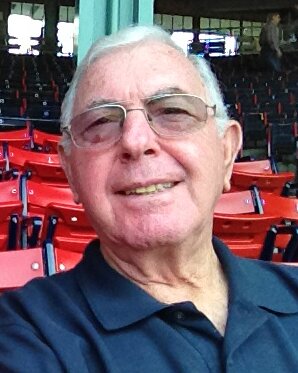 Michael R. DiBacco passed away at the Sawtelle Family Hospice House on Monday, June 27, 2022.   The beloved husband of Julia M. (Buontempo), he was 84 years old.

Michael was born, raised and educated in Medford.  He was the son of the late Santo and Anne DiBacco.  Michael would meet his future wife Julia, who lived close by, when he was 15 and she was just 13.  They married in 1959.  Michael and Julia had a wonderful life together that spanned close to 70 years.   They raised their family in Burlington, moving there from Medford in 1966.  After 50 years, they moved to their current home in Wilmington.

Michael served his country in the United States Marine Corp from 1955 to 1958 achieving the rank of Corporal.  He had a long and distinguished career as a Senior Planner at Itek Corporation, a defense contractor specializing in optical systems for spy satellites and various other reconnaissance systems.  Most notably, he was a major part of the team that produced the camera system for the original Mars Viking Lander in 1976.  He enjoyed the challenges presented in his job and took great pride in working for the organization for over 30 years.

Michael was a wonderful father and uncle.  He was a man of strength, love, compassion and devotion.  He was always there for his children and his nieces and nephews.  When his sons where young, he coached baseball and hockey.  He never missed any of their sporting events.   As a family, they enjoyed spending their summer vacations at Crescent Lake in Wolfeboro, NH.  Michael loved the outdoors and enjoyed fishing and hunting with his sons, his Uncle Sam and Uncle Tony and his cousins, John, Patrick, Daniel and Anthony.  In his later years, he enjoyed the occasional game of golf with his sons, grandsons and friends.  During their retirement years, Michael and Julia enjoyed wintering at their condominium in Fort Myers, Florida while spending quality time with their son Robert’s family.

Michael loved his home in Burlington and took meticulous care of his yard.  He always took pride that his yard was arguably the greenest in the neighborhood!   Michael was thrilled to become a grandfather and great grandfather and, more than anything, he enjoyed spending time with his family.  He loved the holidays and Christmas time was always fun for him as he would call his grandchildren and pretend to be Santa Claus!  Michael was a gregarious, outgoing person who got along with everyone he met.  He will be remembered as a loving husband, father, brother, grandfather, great grandfather, uncle and devoted friend.

Michael was the beloved husband of 62 years of Julia M. (Buontempo).  He was the loving father of Michael S. DiBacco & his wife June of Boxford, Robert M. DiBacco & his wife Clarice of Ft. Myers, FL and the late Lisa DiBacco.  Proud grandfather of Angelique Schena & her husband Matthew, Michael J. DiBacco & his fiancée Melissa D’Andrea, Daniel M. DiBacco and his love Marguerite Firth, Victor M. DiBacco and Luca B. DiBacco.  Great grandfather of Jacoby R. Schena.  Brother of Anne Marie Fecteau & her husband William of Wilmington.  Brother-in-law of Lucy Buontempo of Medford.  Michael is also survived by his many cousins, nieces and nephews. Visiting hours will be held at the Edward V. Sullivan Funeral Home, 43 Winn St., Burlington on Friday, July 8 from 4-8pm.  Funeral from the Funeral Home on Saturday, July 9 at 8:30am.  Followed by a Mass of Christian Burial at St. Francis of Assisi Church, 441 Fellsway West, Medford at 10am.  Services will conclude with burial in Oak Grove Cemetery, Medford.

In lieu of flowers, memorials in Michael’s name may be made to The National Kidney Foundation, www.kidney.org