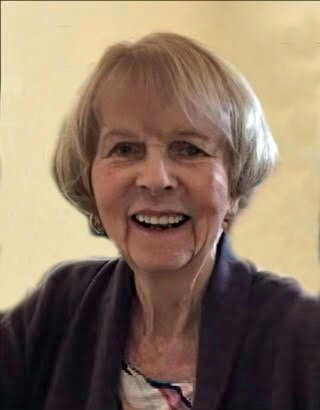 Theresa “Tess” Elliott, a woman devoted to her family and church, passed away after an extended illness with her family at her bedside on Friday morning, July 1.  Tess was born in Lynn.  She was one of 7 children born to Irish immigrants, Patrick and Ellen Raftery.  She grew up and was educated in Lynn.  She was a graduate of St. Mary’s High School in Lynn.  While on a trip to NH with her friend, Clair, she met a returning Korean War Veteran, Richard “Dick” Elliott when he and his friend took her oars as they were paddling Echo Lake.  That playful nature won her over. They would marry on September 14, 1957.  Dick and Tess lived in Connecticut and New Jersey before moving to Burlington in 1966.  Theirs was a beautiful love story.

Tess worked at the Federal Reserve Bank in Boston before having children.  She then remained home with her daughters until they were all comfortably settled in school.  She then went back into the workforce as an editor at the IRS in Andover.  Tess always said being a wife, mother, and grandmother was what she thought was her most important work.

Tess and her husband Dick were longtime members of St. Margaret’s Church.  She taught Sunday school and worked in the office while Dick sang in the choir, was a Eucharistic Minister, and religious education teacher and director.  Being part of St. Margaret’s parish family was a very big of their lives, and their faith was the foundation of their family.

Tess and Dick were wonderful role models for their children.  Their two values were that of faith and family.  Tess’s daughters saw how the couple followed their faith, supported each other in their daily lives, and always placed family first.  They had special vacations spent in Hawaii, Las Vegas, and Arizona and became snowbirds during their retirement years spending six weeks in Naples or Ft. Meyers, Florida.  Tess gladly helped in raising their grandchildren while their parents worked.  She just cherished when all the family were together at holidays, family celebrations, or a Sunday afternoon dinner or cookout.  The past few years have not been easy for Tess with Dick’s passing and her own health issues, but her daughters and their families opened their homes and hearts to Tess and lovingly cared for, supported her, and showered her with love.

Visiting hours will be held at the Edward V. Sullivan Funeral Home on Thursday, July 7 from 10 a.m. to 11:30am, followed by a Mass of Christian Burial at St. Margaret Church in St. Veronica Parish, www.stveronicama.org, 111 Winn Street, Burlington on Thursday at noon.  Services will conclude with a burial in Pine Haven Cemetery, Burlington.

Share Your Memory of
Theresa
Upload Your Memory View All Memories
Be the first to upload a memory!
Share A Memory