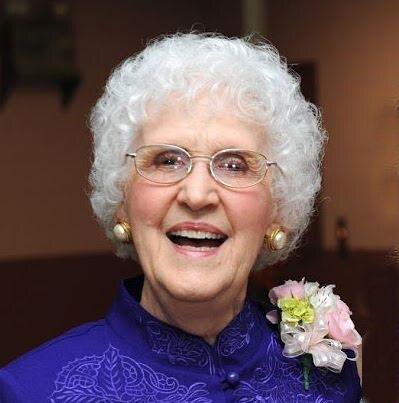 Santosuosso Cain, Jeannette (Robbins) of Burlington, passed away on August 2nd at the age of 99.

She was born Jeannette M Robbins in Somerville, MA, on January 20, 1923, daughter of Ann Rose and George Robbins.  Her family moved to Chicago, but returned to the Boston area while she was still young, and lived in Arlington, Wakefield and Melrose.

She is predeceased by her two siblings, Barbara Kerrigan and Paul Robbins.

As a young girl, she developed skills in both drawing and music.  She became an accomplished pianist and singer.   As a senior at Wakefield High, she sang a leading role in “The Mikado,” and performed locally in various talent shows.  She often performed with her sister Barbara, who could also sing and play piano.  They performed together in USO shows during the war.  She worked as a secretary at Monsanto Corp.

In 1948, she married Alfred Santosuosso, Jr., from Hyde Park, where they lived for 30 years.  She was a mainstay of her church choir, sang for funerals and weddings, and was known for her rendition of “O Holy Night” each Christmas Eve. She was an Avon Lady for several years, and later worked for State Street Bank for 20 years.  After retiring from State Street Bank, she worked for the MITRE Corp.

In 1978, Al and Jeannette moved to Burlington.  Jeannette and her sister, Barbara, and cousin, Peggy, along with two friends, formed the group “Forever Young” and sang for senior centers and nursing homes. She also played piano at Lahey Hospital, entertaining visitors.  Jeannette continued to entertain throughout most of her life, and would often perform with her daughter, Jeanne, who is also a singer.

She was married to Al for 45 years, until his death in 1993.  Jeannette always loved ballroom dancing.  After Al’s passing she met Charles Raymond Cain who shared her passion for dancing.  They were married briefly until his sudden passing.

In later life Jeannette resided at Stonebridge assisted living facility in Burlington and at Bear Hill Nursing Center in Stoneham.

Jeannette will be remembered for her musical talent, but for all who knew her she was a real lady, beautiful inside and out.  She made lifetime friends everywhere she went, and love for her family was the center of her well-lived life.

A visitation will be held at St. Margaret’s Church, at St. Veronica Parish, 111 Winn St., Burlington, on Friday, Aug. 5, from 9 a.m. – 9:45 a.m., followed by a Mass of Christian Burial.  Services conclude with burial in Mt. Calvary Cemetery, Roslindale.   The family requests that everyone in attending the services wear a mask.  In lieu of flowers, memorials in Jeannette’s name may be made to the residents’ recreation fund at Bear Hill Rehab & Nursing Center, 11 North St., Stoneham, MA 02180 or to St. Veronica Parish at 111 Winn St., Burlington.  Arrangements are under the direction of the Edward V Sullivan Funeral Home, Burlington.  For directions see: www.stveronicama.org.   For obituary, memorial video and online guestbook, see www.sullivanfuneralhome.net.

Share Your Memory of
Jeannette
Upload Your Memory View All Memories
Be the first to upload a memory!
Share A Memory