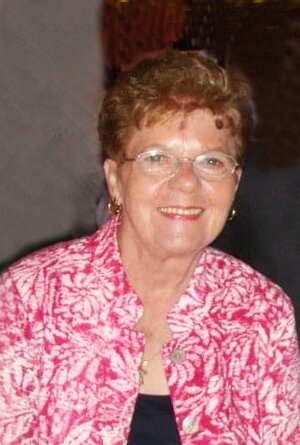 Noreen Frances Hanafin, a loving wife, mother, Nana, great grandmother, sister and aunt, passed away after a long illness surrounded by her family on Thursday afternoon, August 11, 2022.  She was 86 years old.  She was born in Cambridge, the daughter of Mary and John Anderson.  Her dad, John, sadly passed when she was just a baby.  Years later, her mother married, George Janes, who loved Noreen as his own.   Noreen grew up in the Central Square section of Cambridge.  She graduated from Cambridge Latin High School.  Her aunt and uncle, Helen and Henry Mahoney, introduced her to a young coworker who was a Korean War Veteran and more impressive went to church every day before work.  Dick knew right away that he wanted to marry Noreen but she said she was too young at 17 and he 21.  They waited till she turned 20 and were married on October 6, 1956.  They purchased a home in Burlington just before the wedding.  When they returned from their honeymoon, they found out Dick’s relatives also purchased homes in the same neighborhood after hearing about it.  So officially, they were the “First Hanafin Family” to move to Burlington.

Noreen stayed home with her sons and daughter, while Dick worked as an M.D.C. police officer.  She would later take a part time position as a salesclerk at Jordan Marsh.  The job got her out of the house, and she was always in the know to the best deals, mark downs, and clearance items in the store.  She was a member of a bowling league and went to Bingo with her girlfriends.  She was a member of the Irish American Club in both Arlington and Malden.  She enjoyed the many socials they offered at the clubs.  Noreen enjoyed car rides up the Mohawk Trail and bus trips to Foxwoods with friends from Burlington. She loved shopping for bargains with her longtime friend, Maddie.

Noreen’s life revolved around her family.  She made a loving home for her family.  She had a “go with the flow” attitude.   She reluctantly allowed her husband and children to have all sorts of pets from the traditional dogs and cats, to geese, ducks, rabbits, goats, and fish.  Family vacations were spent at York Beach and Old Orchard Maine for decades.  Sunday dinners were a family tradition with all her children and their families.  She never knew how many to cook for each week, but always managed never to send anyone home hungry.   She took care of some of the neighborhood kids when needed. She was a great listener and gave great advice to her children, grandchildren and friends, who knew they could go to Noreen if they had a problem.  She was always available to help out when needed.  She touched the hearts of all her family and friends and her memory will live on in their hearts and minds.

Visiting hours will be held at the Edward V. Sullivan Funeral Home, 43 Winn St., Burlington on Monday, Aug. 15 from 4-7pm.   Funeral from the Funeral Home on Tuesday, August 16 at 9am, followed by a Mass of Christian Burial at St. Margaret’s Church, in St. Veronica Parish, 111 Winn St. at 10am. Services will conclude with burial in Chestnut Hill Cemetery, Burlington.

In lieu of flowers memorials, in Noreen’s name, may be made to People Helping People, PO Box 343, Burlington, MA 01803 www.peoplehelpingpeopleinc.org

Share Your Memory of
Noreen
Upload Your Memory View All Memories
Be the first to upload a memory!
Share A Memory