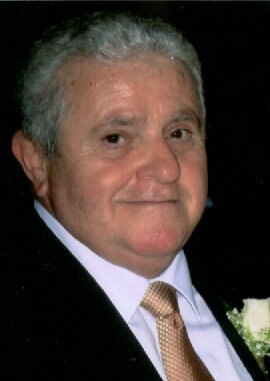 Peter John Fitzpatrick, Jr. a retired Production Manager for Vicor, passed away at the Lahey Hospital and Medical Center on Monday, August 15, 2022.  The beloved husband of 55 years to Joanne M. (Salvi) he was 78 years old.

Peter was born in Somerville.  He grew up in the North End of Boston and graduated from Charlestown High School.  It was while in high school that he would meet Freshman Joanne Salvi.  They dated all through high school and married on April 8, 1967.   They moved to Burlington in 1968 where they would raise their two sons.

Peter had a long and successful career in the Manufacturing industry. He worked for Baird Atomics and Data General.  He worked as a Production Manager for Vicor in Andover retiring with close to 25 years of service to the organization.   Peter was a handy man and was skilled in electrical, plumbing and carpentry.  There wasn’t a project he wouldn’t tackle even a second-floor addition to his home in Burlington.  He was proud of the outside of his home as well.  He had an amazing vegetable and flower garden.  You were one of the lucky ones if he shared his home-grown tomatoes with you!

Peter was an avid golfer. While working at Vicor he was a member of their golf league and enjoyed golfing at the Andover Country Club.  Being a true Bostonian, Peter was a Patriots and Bruins Fan. He also enjoyed watching a good boxing match.

Peter and Joanne had a passion for traveling.  They had a time share at the Marriot Ocean Club in Aruba, took trips to Las Vegas, and many Caribbean Cruises.  One of their favorite destinations was the Norwegian Boston to Bermuda Cruise.  Having taken over 10 cruises on the ship they were Platinum Members.  They had just returned from their most recent cruise to Bermuda on August 5.   Peter and Joanne’s happiest cruise was on the Disney Cruise Line with their beloved granddaughter Anna.   They also enjoyed taking vacations locally in New Hampshire.

Family was the center of his life.  He was a proud and supportive father to his two sons.  Peter was always happy when his sons and their friends would spend a day at their pool or enjoy a July 4th holiday together.    In recent years his greatest joy was his granddaughter, Anna Rose!  He was an incredibly proud “Papa”, and she was the love of his life!

This past July, Peter was working in his yard and noticed his wedding ring was missing.  A ring that he had not taken off his hand since his marriage to his beloved Joanne.  With the help of two strangers the ring was found on his birthday, July 12.

Peter was the beloved husband of Joanne M. (Salvi).  He was the loving father of Peter Carl Fitzpatrick & his wife Victoria of Billerica and Christopher Fitzpatrick of Burlington.  Proud Papa of Anna Rose Fitzpatrick.  Brother of Michael Fitzpatrick of Wrentham and the late Jeanette Mead and Angela Fitzpatrick.  Visiting hours will be held at the Edward V Sullivan Funeral Home, 43 Winn St., BURLINGTON on Thursday, Aug. 18 from 10 – 11:30 a.m.  Followed by a Mass of Christian Burial in St. Malachy Church, at St. Veronica Parish, 99 Bedford St., Burlington at Noon.  Burial to follow in Pine Haven Cemetery, Burlington.  In lieu of flowers memorials in Peter’s name may be made to St. Jude Children’s Research Hospital, www.stjude.org.

To see the BCAT story on Peter's lost wedding ring, click the link below!