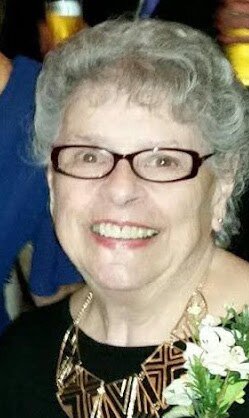 Georgina Carol (Goffredo) Pitts, a retired Manager at Ben Franklin in Belmont, passed away at the Lahey Hospital & Medical Center on September 1, 2022.  The beloved wife of the late Wiliam Francis Pitts, she was 87 years old.

Georgina was born, raised and educated in East Cambridge.  She was one of three daughters born to the late Maurice and Antoinette Goffredo.  She would marry the love of her life, William Francis Pitts in 1956.  They lived in Watertown where they would raise their two daughters.  Georgina and Bill designed their “dream home” in Burlington where they moved to in 1983.

Georgina was a Store Manager at Ben Franklin in Belmont for over 50 years.  She started as a clerk and worked her way up to Store Manager.  She loved her job and her daily interaction with her customers.  She had a great ability to multitask and there wasn’t any role in the store that was beneath her.  Georgina worked side by side with her dear friend Liz Dally for many years.  Liz was more like a daughter than a co-worker.    Georgina was still working at the age of 84 until the pandemic forced the store to close its doors.

The Pitts family always looked forward to the annual vacations at Weirs Beach on Lake Winnipesauke.  They stayed at the same hotel summer after summer.  Many special memories were made during these vacations.  In later years Georgina and Bill enjoyed trips to Las Vegas and Foxwoods.

Georgina had great love for her children, grandchildren and great grandchildren. She had a very special relationship with her grandson August, who also lived in the same home with her.  They saw each other daily and were as “thick as thieves” always doing fun things together, all the while she was sneaking him sweets.

Georgina will be remembered as an outgoing, thoughtful, and generous woman. She had an incredible smile that just warmed everyone’s hearts.

Georgina was the beloved wife of the late William F.  Loving mother of Wendy Alcindor of Burlington and Lorraine Gratta & her husband Paul of Cohasset.  Sister of the late Ann Klemas and Rose Searles.   Grandmother of Dr. Brooke Hammel & her husband David, Alexander Alcindor, Vincent Gratta and Vanessa McMillan & her husband Christopher.  Great grandmother of August, Wesley & Sophia.   A Mass of Christian Burial will be held at St. Margaret Church, in St. Veronica Parish, 111 Winn St., Burlington on Thursday, Sept. 8 at 10 a.m. www.stveronicama.org  Relatives & friends respectfully invited to attend.  Burial will be private.  In lieu of flowers memorials in Georgina’s name may be made to St. Jude Children’s Research Hospital, www.stjudge.org

Share Your Memory of
Georgina
Upload Your Memory View All Memories
Be the first to upload a memory!
Share A Memory