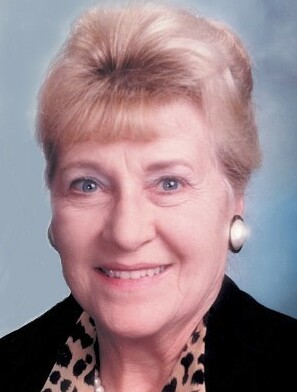 Iris (Varden) Clayfield, beloved wife of the late Ronald Clayfield, passed away with family by her side on October 16th, 2022 at her home in Burlington at the age of 94. Iris was born in Nuneaton, England, only child of Harry and Ena Varden. Iris and Ronald met early in life, as they were born in the same town just two days apart. The two were married, and started a family in their hometown of Nuneaton, where they welcomed their first son, Peter.

In the 1950s, Iris remained in England with Peter as Ronald set out to find a better life for the family in North America. After a year and a half, Ronald sent for Iris. Iris packed up Peter and traveled across the Atlantic to Montreal, Canada and eventually Toronto. Iris always said that it broke her parents’ heart when she left England. While in Canada, Iris and Ronald welcomed their second son, Jamie. The family then moved in 1959 to Burlington, Massachusetts. Several years later the family welcomed their third son, Jonathan.
Iris stayed at home to raise her three sons. She enjoyed caring for the family and the household, and the boys remember how much she liked cooking for the family. Her lamb with homemade mint sauce was a personal favorite for them, along with her delicious mince meat pies at the holidays. It wasn’t until all of the boys were grown that Iris went on to find a job in retail at Lord & Taylor’s in the Burlington Mall. Iris worked for Lord & Taylor’s in their hand bags department. She loved what she did, and worked there for many years receiving several outstanding employee awards.

Iris never forgot her English roots. She loved her afternoon tea. She was a great fan of Downton Abbey and The Crown. She kept up with the monarchy and watched all of the televised events, most recently the coverage of the funeral of Queen Elizabeth II. Iris never lost her English accent, which was loved by all with whom she spoke. A special highlight for Iris came during a visit home to England with Ronald. The two were waiting for their hotel elevator, and when the doors opened, none other than Louis Armstrong, the World-Renowned trumpeter was standing in the elevator. Ronald shouted “Satchmo!” and Iris reached out and gave him a big hug and kiss on the cheek; a hug and kiss she talked about for many years after.

Iris loved watching the Boston Celtics and the New England Patriots. In the 1980s, she, Ronald and Peter all went to see the Celtics play the 76ers at the old Boston Garden. It was a team that featured Larry Bird, Kevin McHale, Robert Parish, Dennis Johnson and Danny Ainge – her favorites! In the 2000s, Iris loved watching the Tom Brady and Bill Belichick-led New England Patriots win many games and championships!

Iris will be deeply missed by many. She loved her sons, her grandchildren, and both her daughter-in-laws very much. She cherished the time she got to spend with them knowing it would never be enough. As Iris’s health declined, she was blessed to remain in her home with the amazing help and care provided by Cindy Gilpin (as well as her husband Paul on occasion), and her live-in aides, Cissy and Faridah, who treated Iris like their mother.

Iris was the loving mother of Peter R. Clayfield & his wife Nancy of Tustin, CA, Jamie S. Clayfield of Rochester, NY, and Jonathan C. Clayfield & his wife Donna of Spencer, MA. She was the grandmother to Alexa Clayfield of Tustin, CA, and Justin & Tyler Clayfield of Spencer, MA. Iris is also survived by her 17-year old cat, Treasure, who loved Iris as much as Iris loved her.  In fact, Iris loved all animals and wildlife – from the birds, turkeys and deer that visited her backyard frequently, to the snow leopards, jaguars, and gorillas at the Stone Zoo.
Iris’s life will be celebrated during a funeral service at St. Mark’s Episcopal Church, 10 St. Marks Rd., Burlington, MA 01803, on Saturday, November 5th at 11 AM. Family and friends are respectfully invited to attend. In lieu of flowers, donations in Iris’s name may be made to the Stone Zoo (www.zoonewengland.org/act). For obituary, online guestbook, video and tribute see www.sullivanfuneralhome.net

Share Your Memory of
Iris
Upload Your Memory View All Memories
Be the first to upload a memory!
Share A Memory