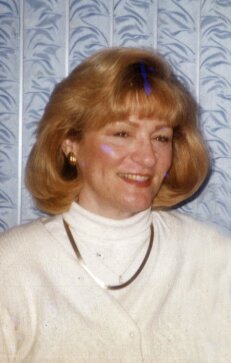 Ruth Ann (Bisson) Lavoie, passed away at her home in Burlington on Wednesday morning, October 19, 2022, the beloved wife of Lawrence Lavoie, she was 80 years old.

Ruth was born and raised in Lynn.  She was the daughter of the late Martin Bisson and Norma Kelly.   Ruth was a graduate of St. Mary High School.  Ruth was out on a stroll with her girlfriends when she met Larry Lavoie.  They married on June 14, 1962.  They lived in Lynn for several years before moving to Burlington in 1977.

Ruth worked as a secretary until her son Mark was born. She then became a stay-at-home mom.  She was an attentive and nurturing mom.  Ruth loved to spend time with Mark and there was always an outing scheduled whether it was going to the movies or a trip to the local park.  Ruth and Mark weren’t just mother and son they were the best of friends. Ruth was filled with joy with Mark married his wife, Laura.  Ruth and Laura had an incredibly close relationship.  Ruth was like a second mother to Laura. Holidays were an important part of the Lavoie family.  Christmas gatherings were spent with Ruth’s sister Tina’s and brother Michaels families and in recent years Thanksgiving was spent at Mark and Laura’s home.

Ruth and Larry had a wonderful life together.  For over 25 years they enjoyed their annual trips to Aruba.  Many of the trips to Aruba included Mark and Laura.  Larry worked for Eastern Airlines which provided Larry, Ruth and Mark the opportunity to travel extensively and have many fun vacations.  Special family memories were made in Hawaii, Bermuda and the Bahamas.  In later years, Ruth and Larry enjoyed occasional trips to Foxwoods.

Ruth was blessed to have two wonderful grandchildren Renee and Jack who were an important part of her life. Being a grandmother was the perfect role for Ruth.   As young children she would help to babysit them.  They loved their grandmother and as her Alzheimer’s disease progressed, they made sure they were always there to visit with her and be there for her.

Ruth was the beloved wife of Lawrence Lavoie.  She was the devoted and loving mother of Mark Lavoie & his wife Laura of Dracut.   Proud grandmother of Renee & Jack Lavoie.  Sister of Tina Howard of Lynn and Michael Kelly of Framingham.

A service  will be held at the Edward V Sullivan Funeral Home, 43 Winn St., Burlington funeral home, October 25 at 4pm.  Following the service, visiting hours will be 4:30 to 6:30pm

Share Your Memory of
Ruth
Upload Your Memory View All Memories
Be the first to upload a memory!
Share A Memory