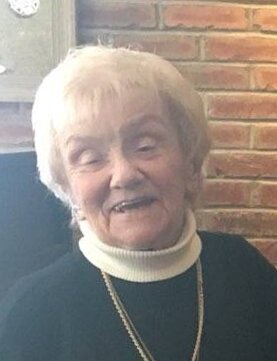 Rosemary (Finnegan) Carey, passed away on Friday, November 4, 2022. The beloved wife of the late Walter Carey, she was 87 years old.

Rosemary was born and raised in Braintree.  She was the daughter of the late Edward and Mary Finnegan.  She would meet her future husband Walter on a blind date. They married, lived in Connecticut for a brief time before settling in Burlington where they would raise their two children. Rosemary lived in a wonderful neighborhood in Burlington where neighbors were always there for each other.

Before her children were born, she worked as a dental assistant.  She also worked in the Burlington school system in the lunch program.  However, Rosemary’s greatest role was that of wife, mother and grandmother.  Rosemary led a full and active life throughout her 87 years.    Once you met Rosemary you were her friend for life.  Her home was her domain, and her telephone was her best friend!    Rosemary was a devout catholic and a longtime parishioner of St. Margaret’s and most recently St. Malachy Church.  Rosemary will be remembered for her funny, outgoing and upbeat personality.

Rosemary was the beloved wife of the late Walter Carey. She was the loving mother of Susan Thompson & her husband Keith of Glastonbury, CT and the late William “Billy” Carey.  Proud grandmother of Conor, Marykate & Callan Thompson.  Sister of the late Margaret Mary Ferrucci and Eileen Duggan.  Visiting hours will be held at the Edward V Sullivan Funeral Home, 43 Winn St., Burlington on Friday, November 11 from 10:00 AM – 11:30 AM followed by a Mass of Christian Burial at St. Malachy Church, in St. Veronica Parish, 99 Bedford St., Burlington at Noon.  A private burial will be held at the Massachusetts National Cemetery, Bourne.  In lieu of flowers memorials in Rosemary’s name may be made to St. Jude’s Children’s Research Hospital www.stjude.org  or the Tunnel to Towers Foundation www.t2t.org

Share Your Memory of
Rosemary
Upload Your Memory View All Memories
Be the first to upload a memory!
Share A Memory