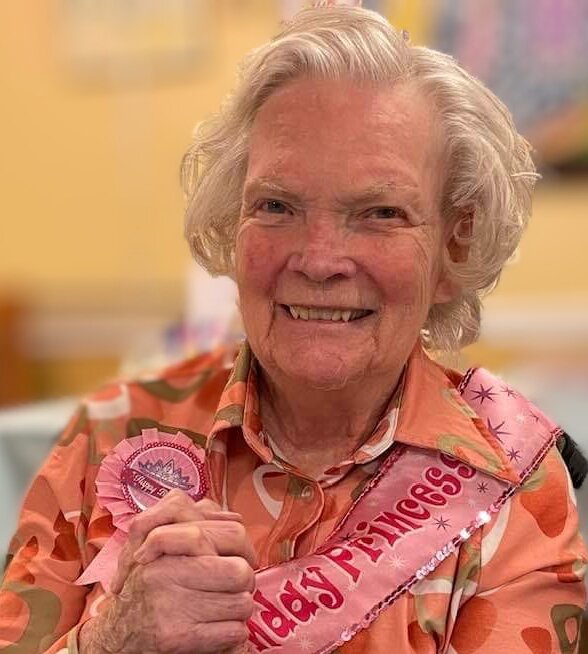 Leonie D. Horeanopoulos, a fifty-four-year resident of Burlington passed away on Saturday, November 12, 2022.  She was 95 years old.  Leonie was born in Manchester, NH.  She was one of 10 children born to Canadian immigrants, Joseph and Emma Charest.  She grew up in Manchester, New Hampshire and was a graduate of Central High School.  She married her husband, Nicholas Horeanopoulos, a World War II Army Air Corps Veteran, in 1946.  They started their life together in Manchester and Bedford, NH, a short time in Presque Isle, Maine, before settling in Burlington in 1968.  She found the Presbyterian Church in Burlington, where she attended Sunday services, sang in the choir, and participated in many of the church fundraisers, activities, shows, and socials.  In her later years, she was very active at the Council on Aging in Burlington and loved participating in their fitness classes.  When her family was young, there were camping trips to Waterville Valley, Bear Brook, and Acadia.  Leonie and Nick spent almost 20 years of their retirement wintering in Pompano Beach, Florida.  Reaching the age of 95 is quite an achievement, which she celebrated with her family in July.  She was blessed to see her family grow to four generations.  Her last day was spent socializing with her friends at Billerica Crossings and then she peacefully passed away in her sleep.  She will be lovingly remembered and never forgotten.

Leonie was the beloved wife of late Nicholas A. Horeanopoulos. Loving mother of Mark Horeanopoulos & his wife Sherry of Princeton, Kyle Horeanopoulos & his wife Cheri of Bradford, and the late Jena Day & her surviving husband Willie Day of GA. She was the sister of the late Irene Valliere, Florence Bouchard, Ernestine LaFrance, Louisiana Courchesne, Estelle Sullivan, Joseph, Alsime, Armand, and Roland Charest. She was the loving “Grammy Lee” and “Mémère” of Kimberly Barlow, Jonathan Day, Ali, Leah, Hunter, and Paige Horeanopoulos. She was the great grandmother of Brittany Riordan, Elizabeth Thompson, Rebekah Barlow, Jessica Barlow, and Charlotte Lee Day and great-great grandmother of James and Zachary Thompson.

Visiting hours will be held at the Edward V. Sullivan Funeral Home, 43 Winn St., Burlington on Saturday, November 19 from noon to 2 p.m. and will conclude with a funeral service starting at 2 p.m. Memorials in Leonie’s name may be made to the Presbyterian Church in Burlington, MA, 335 Cambridge St, Burlington, MA 01803. For obituary, video tribute, and directions see www.sullivanfuneralhome.net

Share Your Memory of
Leonie
Upload Your Memory View All Memories
Be the first to upload a memory!
Share A Memory