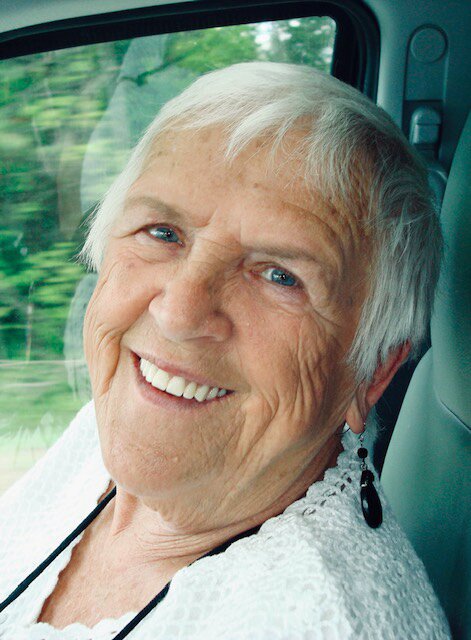 Rosa (Gschossmann) Porter, a retired Florist, passed away at the High Pointe House in Haverhill, MA on Monday, December 26, 2022.  She was 94 years old.  Rosa was born in Ramsau bei Berchtesgaden, a German municipality in the Bavarian Alps, close to the border with Austria.

Rosa grew up during the war years near her grandparents’ farm.  There wasn’t much money, but she owned skis which really weren’t much more than two long pieces of wood. If the boys wanted to use the ski jump in town you could find her among them. She had no fear. If she skied down the side of the hill and broke a ski her grandfather was there to repair, it. As a teenager, she worked in a bakery. Rosa loved to share stories of her experiences throughout her life.

Rosa had a lot of courage. In 1961 her husband Basil, was relocated back to the states. The family got on a ship and headed for the states. They arrived on Oct 13 after circling around with a hurricane. They stayed in the Massachusetts area for three years and then headed back to Germany for another two years, then Georgia, while her husband trained for Vietnam. In 1966, the family moved to Burlington. Rosa went back for visits to Germany on two separate occasions.   She became a United States citizen after 33 years so she could vote for Bill Clinton.

Rosa has a strong work ethic. In Germany she worked in a factory. While living in the United States she ran the curtain department of JM Fields. Then she learned all about carnation growing in the greenhouses working for the Corrazzini’s in Lexington. Rosa also managed or worked at flower shops at the Burlington mall, in Danvers at the Liberty Tree mall, at a shop in Wilmington and Arts and Flowers in Bedford. Rosa retired but still did wedding and prom corsages upon request. During her later years she kept busy crocheting hats, scarfs and blankets for the needy or for the babies in the NICU.

Rosa has more energy in her little finger than many had who were a lot younger than her. She took care of her home, her pool and her gardens. She decorated for Christmas and made it look better than anything you see in home and garden magazines. Rosa enjoyed traveling by car and was recognized by her distinctive license plate “RAMSAU” and took trips regularly with friends and family. She enjoyed slot machines at various casinos, loved to play cards and did her crossword puzzles in German daily.

Rosa’s biggest joy was taking her granddaughters, Katherine and Kristy on vacation every summer. Her grandchildren saw a lot and learned a lot. Rosa took Katherine and Kristy to a dude ranch; they went skiing and drove west to the Rockies. Rosa also gave them dance lessons. Every new year’s they all got dolled up and went out to dinner. Rosa took them to the best restaurants and going to McDonald’s was a treat.

Rosa will be remembered as a strong and independent woman.

Funeral services will be private.

In lieu of flowers, memorials in Rosa’s name may be made to Minuteman Senior Services www.minutemansenior.org

Share Your Memory of
Rosa
Upload Your Memory View All Memories
Be the first to upload a memory!
Share A Memory