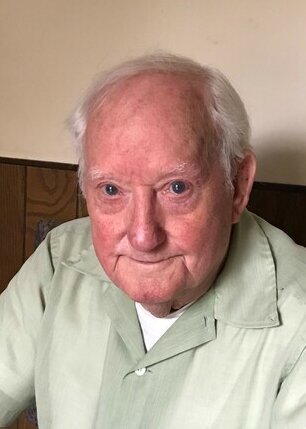 Click on the link (above) to connect to our facebook page (sign in is NOT required). A livestream of the funeral service will begin a few minutes before 11am on Friday, Jan 6th.

Charles Edward Foster, a Teamster, independent trucker, and master carpenter passed away on Saturday morning, December 31, 2022.  He was 93 old.  Charlie was born in Revere.  He was one of nine children born to Reginald and Bertha Foster.  The family grew up in a modest home in Somerville.  He grew up and was educated in Somerville.  He learned from his father and siblings about the value of hard work and being self-reliant.  There was hardly a thing that Charlie couldn’t do himself.  He enlisted in the Navy in January of 1946.  He served aboard the USS Chikaskia which was a Cimarron-class fleet oiler that provided petroleum products where needed to combat ships.  He held the rank of Fireman Second Class and tended to the ship’smassive boilers.  The Chikaskia was assigned to Joint Task Force 1 and participated in the atomic bomb tests at Bikini Atoll in July 1946 known as Operation Crossroads.  He was discharged honorably in November of 1947.

Charlie had no fear of hard work.  He often held two full time jobs at the same time.  He was a member of Teamster’s Local 25 for 30 years.  He drove many of those years for Frank J. Cole Company.  He was also licensed to teach truck driving as well.  He then went out on his own.  He purchased a truck and drove nights delivery a wide variety of cargos including ice cream all over New England.  During those years he worked for his brother Tyler, as a master carpenter.  He could do almost every aspect of building a home, from the excavation, framing, all the way to the finish work.  He could even build cabinets from scratch.  The company built housing developments in Carlisle, Billerica, and the surrounding towns. He used all his skills to build his family a vacation home in Ossipee, NH in 1985.  That home has been the Foster family gathering place for four generations.  Charlie would tinker around the home, boat, fish, and spend endless hours pulling his children and grandchildren around the lake waterskiing.  Prior to the Ossipee home, the family were avid campers spending many summer vacations at Westwood Shores, White Lake, and Pine Knoll Campground. Charlie restored a 1931 Ford Model A and loved showing it off at car shows, parades, and other car events.  His Model A wonnumerous trophies over the years.  Charlie also enjoyed model trains.  As with everything he did, he was all in.  His train set encompassed his entire attic.  The buildings were hand made replicas of train stations he visited in New Hampshire.

Charlie was a proud man.  He worked to give his family the opportunities and experiences he did not have being one of ninechildren.  He was a strong role model for his family.  He leaves his large family with wonderful memories and stories growing up as Charlie as a husband, dad, grandfather, and great grandfather.

Share Your Memory of
Charles
Upload Your Memory View All Memories
Be the first to upload a memory!
Share A Memory