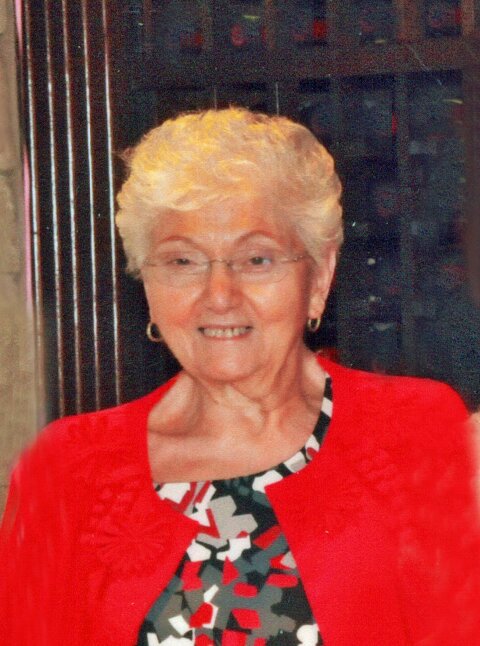 Madeline P. Daly, an Inside Sales Representative, former President of a local trucking company, and devoted wife, mother, Nonnie, and sister, passed away on Sunday, January 1, 2023.  She was 83 years old.  Madeline was born in Cambridge.  She was the daughter of Charles and Frances D’Angelo.  She grew up in Watertown and was a 1957 graduate of Watertown High School.  She then went on to attend Bentley College.  She married her husband Peter Daly in 1959 after he was discharged from the Navy.  They settled in Burlington in 1962 and continued to remain there throughout their lives.

Madeline was a woman who could do almost anything, always with high energy and power.  She worked as an inside salesperson in the Electronics industry for 30 plus years.  She started with Schweber Electronics in Waltham which later became Arrow Electronics, Wilmington where she ended her career. She worked just like she ran her home.  She was positive, friendly, humorous, had strong convictions, and could confidently share her opinions.  She was a work Mom to her peers.  She was that special person who coworkers could confide in, ask advice, and made them feel appreciated.  Madeline regarded her work peers as her second family.  As President and bookkeeper of P.C.M. Trucking from 1978 to 1997, she devoted her time during evenings and on the weekends while maintaining many other roles and responsibilities.  In addition to her busy workload, she made sure to keep her Avon customers happy selling beauty products for many years. And when that wasn't enough, she also worked for H&R Block during several tax seasons. Madeline’s day must have had 30 hours, because she was always there for her children and her friends as well.  She was their Brownie and Cub Scout Leader and attended their sporting events and activities when time allowed. She and Peter had a home that was always opened to neighbors, friends and their children’s friends. They also enjoyed their summers hosting pool parties, massive cookouts and holiday celebrations.  She could do all of this because she was a planner.  An example was that she would spend her entire Sunday doing one of her favorite things, cooking and preparing meals to ensure for weeknight dinners.  She was notorious for having twice the amount of food than she really needed.  She had a great circle of friends with her Winnmere gang.  They would laugh, have fun, play cards, celebrate the holidays, and make any Friday or Saturday night much livelier and more memorable.

Madeline was known as the “boss” to her sisters and loved to spend time with her brother and sisters and their families during the holidays and special occasions.  She was always there for her family.  She was a strong role model for her children.  They inherited her work ethic, confidence, positivity and friendly demeanor, and to be grateful for your coworkers and customers. She was always there to lend a helping hand and even took a leave of absence from work to help care for her grandchildren so their parents could work.  She had many challenges in her life including the early loss of two sisters and battling and beating breast cancer Madeline never complained and was always a fighter.  She loved to travel when she had the time but spent many years enjoying the family home in West Yarmouth.  She loved being a grandmother and great grandmother.  She was loving, giving, had no favorites, and smothered them with love and affection.  The grandkids called her home Nonnie’s Bootcamp.  Madeline took great pride in her appearance, always ensuring her hair and nails were presentable.

When her home became too much to maintain, she moved into the Tower Hills senior apartments and continued to live independently until recently.  At Tower Hills, she quickly met new friends and was an active member of the Board of Directors. She partook in all the activities, especially Bingo, and spent afternoons with friends playing card games like whist and poker.  Madeline’s lifetime was packed with wonderful memories, great coworkers and friends, and a family whom she adored.  Her spirit and love will live on in the hearts of those she loved.

Visiting hours will be held at the Edward V. Sullivan Funeral Home, 43 Winn St., Burlington on Friday, Jan. 6 from 4-7pm. Funeral from the Sullivan Funeral Home on Saturday, Jan. 7 at 9am. and will conclude with a Mass of Christian Burial at St. Malachy Church in St. Veronica Parish, St. Veronica Parish, 99 Bedford St., Burlington at 10am. The burial will be private.

Share Your Memory of
Madeline
Upload Your Memory View All Memories
Be the first to upload a memory!
Share A Memory