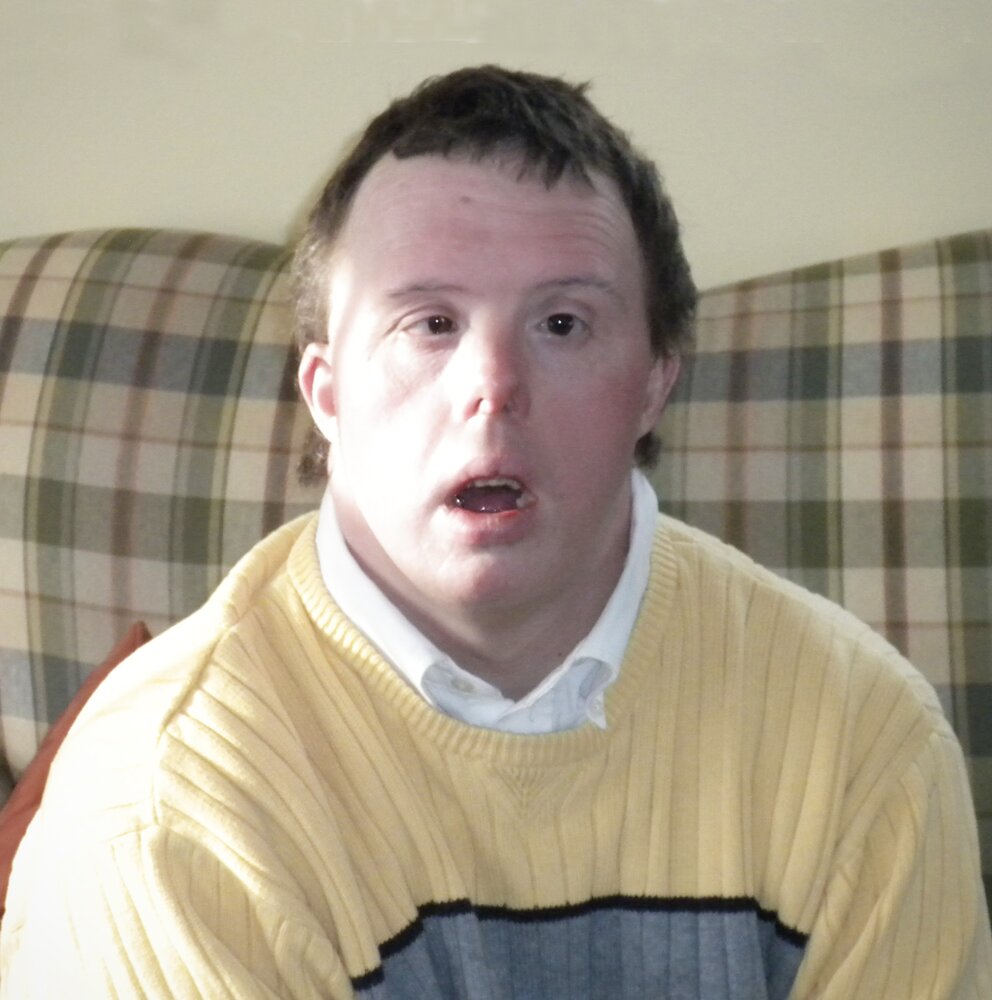 Clicking on the LINK will bring you to our facebook page (sign-in is NOT required).  A live-stream of Paul's funeral mass will begin a few minutes before noon on Monday, January 9th.

Paul Mountain passed away unexpectedly on Sunday morning, January 1, 2023 at the age of 56.  He was born with Down Syndrome but lived a full and dynamic life thanks to his family and friends. Thanks to Paul’s spirit and innocence, he brought laughter and joy to all his family and caregivers.  His parents, Walter and Florence Mountain and later his siblings, David Mountain and Laura Majore as well as his sister-in-law Paula, all saw Paul as a special gift.  They advocated for him as he attended the Burlington Schools, the Lexington LABB program, C-Marc, and the Kelleher Center.

Paul was a man of many talents and interests. He saw the world with rose colored glasses and naivety.  The pressures of the outside world never entered his realm.  He did the things that gave him pleasure like basketball, bicycling, cooking, dancing, listening to music, and occasionally playing the lottery.  His favorite musicians were Michael Jackson, Billy Joel, and Glen Campbell.  His favorite song was “Rhinestone Cowboy” and when given an opportunity would sing it for anyone who would listen.  He loved amusement parks, roller coasters, bumper cars, and any other thrill ride.  He could spend hours playing video games and was exceptional at the Mario Brothers game. He was an avid and knowledgeable professional wrestling fan.  He loved Cape Cod vacations with his family.  He loved to dance, roller skate, and go to Kitty’s Restaurant for dinner. He filled free time watching TV shows from the 70s and had complete collections of DVD’s of his favorite shows. He also loved watching the Red Sox games with his family and he would tell you his favorite player was Jim Rice. He would spend warm summer days swimming in his parent’s pool.  He was like a fish.  He competed in swimming and track and field in the Special Olympics and had many medals. One of Paul’s favorite places was Canobie Lake Park where he would go with his dad. His dream vacation was Disney World, where he flew on a plane for the first time and was upgraded to first class. He rode every ride, and just immersed himself in the Disney magic and experience.  Paul’s world wasn’t a bad place to be and he shared that with family and friends.  When you were with Paul, you were once again a kid.  You went to amusement parks, sang karaoke, laughed, giggled, ate well, and were a kid again.  It was his gift to all he cared for.

Paul had a group of very close friends and caretakers at his home at 998 Massachusetts Ave.  Paul’s buddies; Peter, Eddie, Kenny, Jorge, Marchello were good friends and they went on  many adventures together and were his accomplices in his playfulness.  Paul was like the mayor whether it was at his parent’s home in Burlington or the two group homes in his older years. Paul had a playful innocence to him, and always knew how to work a crowd. If the family was out and there was a microphone unattended, Paul never shied away from the opportunity to get on it, introduce himself, talk and then go into singing a song... He was a bit of a ham, a showman, and a ladies’ man.  He once hailed a cab down in Arlington and had the driver drive him to Burlington to visit his dad, the only thing was he didn’t have any money! There are so many other Paul stories that always bring a smile to your face. His family and friends will always remember him as a bright light who shined in every room, he was in. Paul’s heart was huge, his personality and hugs were infectious, and his memory will never be forgotten.

Paul Mountain was the beloved brother of David Mountain & his wife Paula of Danvers, and Laura Majore of Merrimack, NH. & her fiancé Thomas Noftle.  He was the dear close friend and honorary brother of Paul Camirand of Hanson. Paul was the loving uncle of Sarah Mountain, Andrew Mountain, Abigayle Majore, and Garrett Majore.

In lieu of flowers, memorials in Paul’s name may be made to the Special Olympics, www.specialolympicsma.org, 512 Forest St, Marlborough, MA 01752.