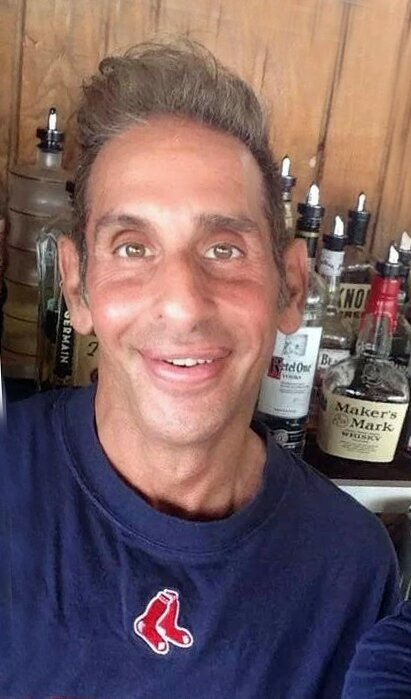 Dante Michael Riccio passed away peacefully at his home surrounded by his family after a short battle with cancer on Sunday morning, January 8, 2023 at 61 years old. Dante was born in Arlington, MA and raised in Burlington. He was the beloved and special son of Dante A. Riccio and Mary (LaMarca) Riccio. He had a wonderful childhood growing up in Burlington with his three sisters and with his aunt, uncle, and six cousins right next door. The Travaglini boys were more than cousins, they were brothers. Together they all ruled Frothingham Road.

After Dante graduated from Burlington High School in 1979, he completed hairdressing school and worked at Marc Anthony Salon in the Boston area. During this time he also began his bartending career that would then flourish in Provincetown. He loved being by the ocean, the art galleries, the night life, and the open-minded culture which led him to take up residence in Provincetown, where he thrived.  He grew into a successful and awarded bartender spending many years working on Commercial Street at the Aqua Bar among other restaurants and night clubs. He could make great cocktails, but it was the amazing way he interacted with his customers and coworkers that made him beloved by so many.  He had a great sense of humor, enjoyed the finer things in life, could cook, dance and did everything with his Dante style and flair.

For several years he helped organize the pageant, Miss Gay USofA. He also had a serious side, and lobbied for Gay Rights.

Dante was also a man devoted to his family. He had a strong bond with his mother. Together, they attended concerts, plays, and shows. Every year, his entire family would spend their summer vacations in Provincetown.  He was a fantastic host; spending days at the best beaches, touring the town, dining at his favorite restaurants, and meeting all his friends.  His nieces and nephews thought he was a celebrity because everyone knew his name and were excited to see him.  Dante had the keen ability to make all his nieces and nephews, including his Travaglini nieces and nephews, feel like they were his favorites. They loved his funny sayings, antics, kindness, and love that he shared with them all.

Dante also loved traveling, meeting new people, and experiencing different cultures. He will be remembered as that special person who lit up the room, made everyone feel welcomed, and was loved by all.

Dante was the beloved son of the late Dante A. and the late Mary Riccio of Burlington, MA. He was the loving brother of Janice Attaya & her husband Mark of Billerica, MA, Julie Sulfaro & her husband Steve of Nashua, NH, and Lori Riccio of Nashua, NH. He was also a brother to Johnny, Steven, Jimmy, Danny, Ronny, and David Travaglini. He was a special nephew to John and the late Janice Travaglini of Plaistow, NH, formerly of Burlington, MA. He was the proud uncle of Victoria Attaya, Vanessa Attaya, Steven Sulfaro, Christina Sulfaro, Serena Chisholm and the many Travaglini nieces and nephews.

Visiting hours will be held at the Edward V. Sullivan Funeral Home, 43 Winn Street, Burlington on Saturday, January 14 from 11am. to 2pm. and will conclude with a funeral home service at 2pm. All are welcome to remember and honor Dante’s life.  Interment will be private.

Share Your Memory of
Dante
Upload Your Memory View All Memories
Be the first to upload a memory!
Share A Memory