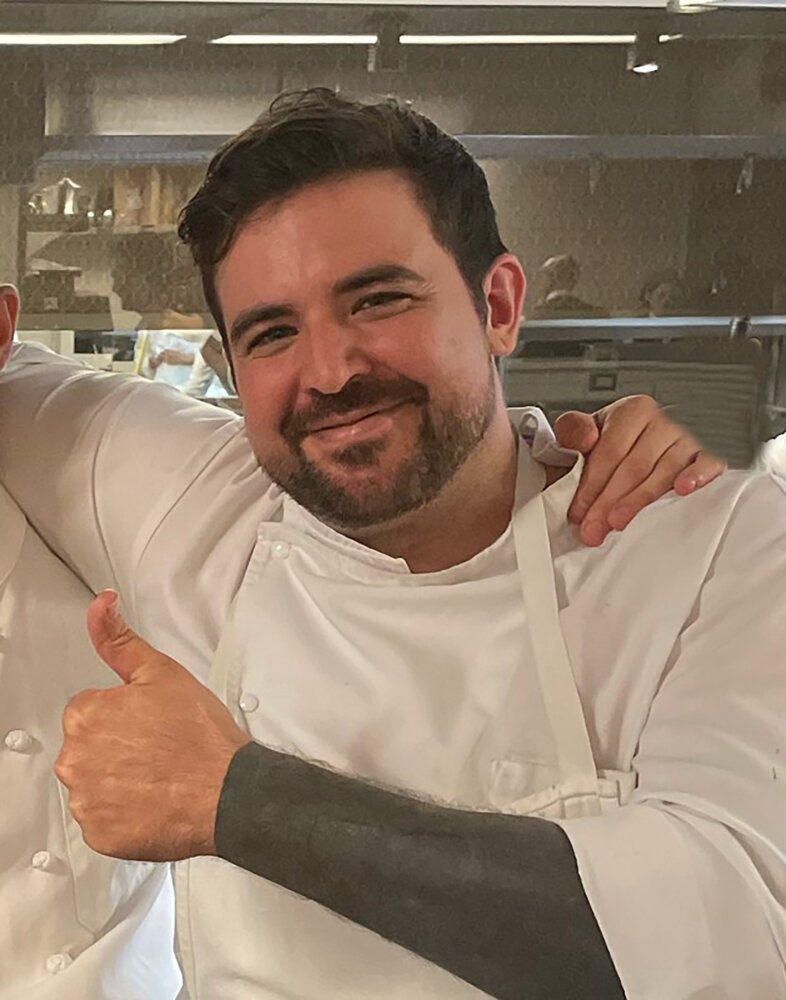 There will be a celebration of Rye’s life in Vermont around the time of his birth in April. If you would like to be informed of details once formalized please send your email address to nickcharyk@gmail.com.

Executive Chef Rye Crofter unexpectedly passed away on Tuesday, January 17, 2023 at the age of 35 in Revere, Massachusetts. Born in Williamstown, Vermont, Rye was the son of two bakers who named him after the grain that was a basis of their livelihood. He grew up with his mother in Thetford, Vermont graduating from Thetford Academy in 2005. Curious and inquisitive with a lifelong passion for food, he insisted on a course of brussels sprouts with raspberry sauce for his 6th birthday party. He made a rule early on that whenever he went food shopping with his mom they had to buy one fun fruit, the more exotic the better. By fourth grade, family friend and fine cook, classics Professor James Tatum, expanded Rye’s culinary repertoire, sharing many an amazing meal while discussing the nuances of the Latin language. Rye met Tim Dearing while working his first paid job as a dishwasher at the Canoe Club, in Hanover, New Hampshire. He worked his way up into the kitchen and soon followed Tim to the Culinary Institute of America, in Hyde Park, New York. Best friends and colleagues, they worked side-by-side making magic in the kitchen until he passed.

Rye’s cooking experience was vast; he studied with some of the best chefs in the country. He interned under Ming Tsai as a line cook at Blue Ginger, in Wellesley, Massachusetts; was sous chef under Chef Matthew Delisle, at L’Espalier in Boston; and was sous chef for Chef Jason Franey, at Canlis in Seattle. He was Executive Chef for the Barbara Lynch Collective and creative chef for her fine dining establishment Menton, in Boston. He loved the art of food preparation, the beauty of plating, and sourcing from small artisan farms and inspired purveyors. Always seeking the best ingredients, he created memorable experiences for diners. But his proudest achievements were encouraging and supporting the growth of his staff. He loved his team like family, and encouraged them to learn and develop, taking them on outings to oyster farms, Vermont cheese and butter makers, small livestock producers, fermenteries and market gardens. He was committed to making positive changes to the culture of the back of the house, rectifying inequities and striving for a work life balance.

He was a highly creative being whose prolific and beautiful life was paralleled with the battle of addiction. He found support among friends and fellow travelers who walked that same dark path. A year spent at Phoenix House in Dublin, New Hampshire with Kate Robertson was a turning point. Kate’s work in the field of addiction treatment has helped many. Thank you, Kate. Rye worked hard to stay clean and sober and through that process developed a deep sense of empathy for all who were struggling. He was always willing to give others a second, third and fourth chance and encouraged many to get help and to stay sober, to walk point, to make beautiful, to live fully, and to give back.

Rye also had a dynamic life outside the kitchen.  A voracious reader with an insatiable curiosity, he had an inquisitive nature. He loved to explore the wild, and was fascinated with bogs, swamps, crazy plants and the ocean. He was an avid snowboarder with a black belt in Aikido, a circus performer, music lover and accomplished musician – there was never a dull moment.  He loved his life and the life he was building with his partner Brit and their cats Gus and Selma. Rye was a joy to be with and made those he touched feel appreciated, valued, respected, and held.

Rye was the beloved son of Susan Howard of Thetford, and Daniel Ruddell and Lisa Kippen of Tunbridge, Vermont. Grandson of Anne and Dick Howard of Burlington, Massachusetts, Andrew Ruddell (dececeased) and Carol Edwards of Huntsville, Alabama, and Patricia Ruddell (deceased) and Julia Smith of El Paso, Texas.  He was brother of Andrew Ruddell (blood) of Tunbridge, and Nick Charyk (heart) of Sharon, Vermont.  Rye was the loving partner of Brit McMahan of Revere. Stepbrother of Meredith, Brian, and Colin Kippen. Nephew of Ed and Christine Howard, Brian Howard, Kathy Anthony, Donna Howard and David Wilkins, Jennifer Ruddell, Mark and Theresa Ruddell, and David and Karin Ruddell. His extended family included the Lovejoy-Bowmers (Grace, Ian, Lu and John) and Charyks (Nick, Anna, Patty and Chris) as well as cousins Rob, Brandon, Crystal, Connor, Brian, Jake, Molly, Michael, Andreas, Andrea, Susiya, Matthew, Daniel and David. In truth, his extended family spread even further, and he will be missed by many.

Visiting hours will be held at the Edward V. Sullivan Funeral Home, 43 Winn Street, Burlington on Tuesday, January 31 from 3-6pm.

There will be a celebration of Rye’s life in Vermont around the time of his birth in April. If you would like to be informed of details once formalized please send your email address to nickcharyk@gmail.com.

Share Your Memory of
Rye
Upload Your Memory View All Memories
Be the first to upload a memory!
Share A Memory