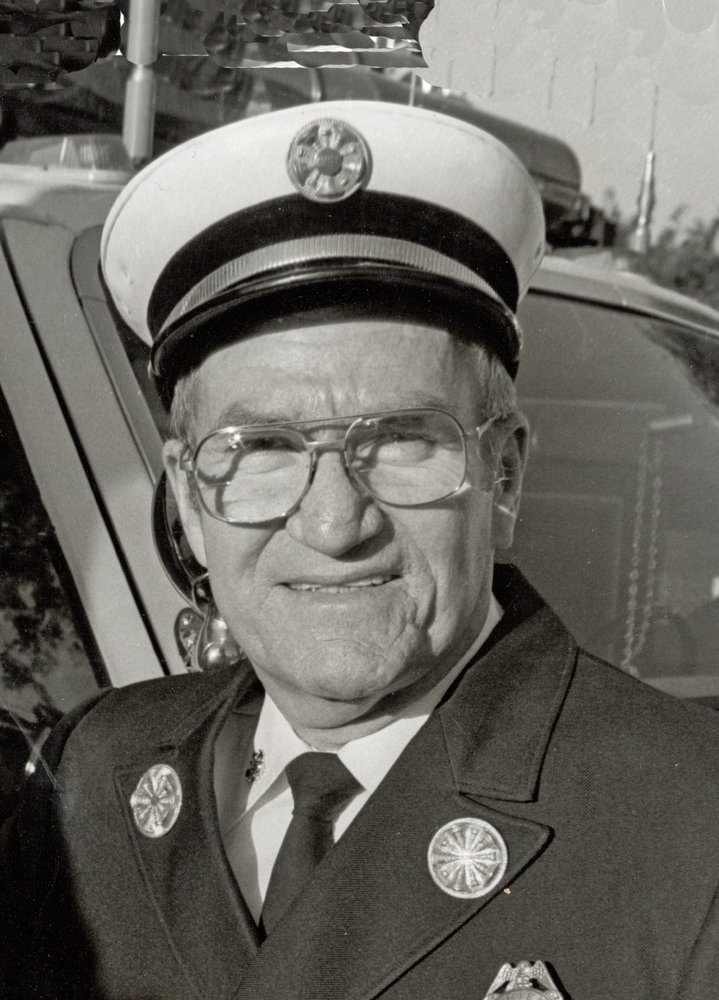 Get Directions
Tuesday
21
May

Get Directions
Tuesday
21
May

Herbert W. Crawford, Burlington’s Fire Chief for 30 years, passed away on Thursday May 16, 2019 at the Sawtelle Family Hospice House. He was 96 years old.  Herb was born in Woburn in 1923.  He grew up on Willow Street and attended Woburn Junior High School and then graduated from Somerville Vocational High School.  His family settled in Burlington in 1942. His family owned and operated Crawford Farm which was situated where Beacon Village and Route 128 are now located.  He grew up working the farm along with his parents, grandparents, aunt and uncle, siblings, and cousins.  He enlisted in the Army to fight in World War II.  He was a member of the 86th Quartermaster Company and was the recipient of the Good Conduct Medal, World War II Victory Medal, Asiatic Pacific Campaign Ribbon, and Army of the Occupation Medal.

Herb returned from the war and went back to the farm to work.  By 1947 he was one of many residents who made up the Burlington Volunteer Fire Department.  In 1953 he was hired as a full time fire fighter and in 1955 he was named Fire Chief.  He would serve as Burlington’s Fire Chief for 30 years.  During those years, Burlington was one of the fastest growing communities in Massachusetts and Chief Crawford constantly advocated to add more fire fighters and fire apparatus, an additional fire station, and better safety equipment.  He always had his fighters safety and Burlington’s residents wellbeing at the forefront of every decision he made.  He laid the foundation and set high goals for his predecessors that followed him.  He was also a member of the Fire Chief Association.

Herb was a vital part of Burlington’s community for over 76 years.  He had an incredible memory and could tell stories and share the town’s history even in his 90’s.  The town‘s biographer, Ed Fogelberg, and the Historical Commission regularly went to Herb for historical information.  He even was part of a BCAT show discussing Burlington’s history.  He was a member of Burlington’s Cemetery Commission.  He was a member of the Mount Horeb Lodge of Masons in Woburn and served as their Master in 1957.  He was also a member of the Shriners.  He could be seen all over town where everyone simply called him “Chief”.  He loved summer vacations spent with family on the shores of Lake Winnipesaukee.  His retirement years were spent helping raise his grandchildren and attending all their sports, activities, and school events.  The Crawford family has lost their patriarch, the Burlington Fire Department has lost their founder, and Burlington has lost a great man who put his heart and soul into making Burlington such a wonderful place to live.

Herb was the beloved husband of the late Mary Ann (Plummer) Crawford. He was the loving father of Karen Pflanz & her husband Herb of Burlington, Brenda Hobart of Salem, NH, Mark Crawford & his wife Kim of Billerica, and Linda Dussault & her husband Dennis of Methuen. He was the brother of Joan Lavacchia of Woburn, David Crawford of Milford, NH, the late Andrew Crawford, Elsie Holden, Lester Crawford, and Warren Crawford.  He was the proud grandfather of Kevin, Amy, Lauren, & Alison Pflanz, Jessica Haberek, Keith & Kerri Hobart, David, Eric, & Kalie Crawford and , Steven and Jason Dussault and great Grandfather of Ezri Haberek and Holland Pflanz.   He also leaves behind his caring friends and neighbors,  Sue & Jim Martin and his devoted caretaker Mary Saidah.

A visitation will be held at the Edward V. Sullivan Funeral Home, 43 Winn St., Burlington (exit 34 off Rt. 128/95, Woburn side) on Monday, May 20 from 4-8 p.m. Funeral services will be held at the Fellowship Bible Church, 71 Center St., Burlington on Tuesday May 21 at 11 a.m. Services will conclude with a burial in Chestnut Hill Cemetery, Burlington. Memorials in Herb’s name may be made to Fellowship Bible Church, 71 Center St, Burlington, MA 01803 or Middlesex East-Visiting Nurse Hospice, 800 West Cummings Park, Suite 5000, Woburn, MA 01801

Share Your Memory of
Herbert
Upload Your Memory View All Memories
Be the first to upload a memory!