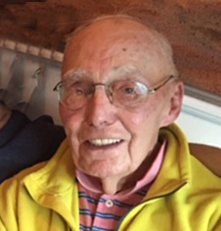 Carl F. Humphreys, a retired Bank Auditor and a man devoted to his family, community, and church, passed away peacefully on Saturday morning, June 8, 2019.  He was 89 years old. Carl was born in Somerville.  He was one of four children born to Carl and Mary Humphreys.  He grew up in Wakefield.  He graduated from Malden Catholic in 1947 and Boston College in 1951.  He was a proud and loyal Alumni of Boston College and longtime BC Hockey season ticket holder.  He was a Corporal in the US Army and proudly served his Country during the Korean War from 1953 to 1955.

Carl worked as a Bank Auditor for New England Merchants National Bank which later merged with Bank of New England.  He spent almost 30 years with the company and retired at the age of 59.  Carl was never content with sitting around.  He needed to be active and involved.  He was a coach for the Burlington Baseball and Softball Association, a coach and director for the Burlington Hockey and Figure Skating Association intramural program and a member of the Knights of Columbus.  He also volunteered his time to the Recreation Department, as a chaperone for the youth ski program at Nashoba Valley and many other Town events.  The word “No” was not in his vocabulary.  He enjoyed being active in all sports including softball, tennis, bowling, and golf with his friends.  He even played occasionally with his son and his son’s friends softball team, “The Weekend Warriors”.  He was a longtime and dedicated runner.  He ran at least 15 marathons over the years in Washington, New York, Rhode Island, Cape Cod and his favorite - Boston.  His last Boston Marathon was at the age of 66. Family vacations on Cape Cod where timed so that he and all his family could run the Falmouth Road Race as a group.  He loved being active, sharing his passions with his children, and being involved in his community he loved so much.

Carl has been a parishioner of St. Margaret’s Church since moving to Burlington in 1963.  He was a CCD teacher, Director of the 7th Grade CCD program, Lector, Eucharistic minister, Lahey Hospital ministry, and the church’s Finance Committee.  Monday mornings were spent with his friends counting and recording the weekend offertory collections.  He attended daily mass whenever possible even as his health and mobility declined.  Carl professed, lived, deepened, and shared his faith throughout his life and gave his family a strong foundation based on faith, commitment, and love.

Carl was a man of family.  He and his wife, Mica, were married for 52 years before her passing in 2012.  They were a warm and welcoming couple who opened their hearts and home to their family and friends.  Carl was a wonderful role model for his children and grandchildren.  He made family time and events important, special, and all inclusive. He never missed all their sports, activities, shows, and events.  In his later years as his health and mobility declined, all his family rallied to support, care for him, and bolster his spirit just as he had done for all of them their entire life.

A visitation will be held at the Edward V. Sullivan Funeral home, 43 Winn St., Burlington (exit 34 off Rt. 128/95, Woburn side) on Wednesday, June 12 from 4-8 p.m. Funeral from the Sullivan Funeral Home on Thursday, June 13 at 9 a.m. Followed by a Mass of Christian Burial in St. Margaret Church, 111 Winn St., Burlington at 10 a.m. Services will conclude with a burial in Oak Grove Cemetery, Medford. Memorials in Carl’s name may be made to People Helping People, P.O. Box 343, Burlington, MA 01803. For directions obituary & online guestbook see www.stmargaretburlington.org or www.sullivanfuneralhome.net

Share Your Memory of
Carl
Upload Your Memory View All Memories
Be the first to upload a memory!