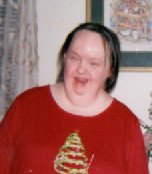 Obituary of Virginia A Hayes

Note:  Funeral has been changed. WIll be held a the Funeral Home on Tuesday at 10:15 AM instead of St. Margaret's Church.

Virginia A. “Ginny” Hayes passed away at her home in Lexington on Thursday afternoon, March 5, 2020.  She was 57 years old.

Ginny was born in Brighton.   Ginny was born with Down Syndrome in 1962. Her parents, Joseph and Rita, chose to bring Ginny up at their home in Burlington.   Ginny’s parents, brothers, sisters, nieces and nephews played an important part in providing her with a wonderful life and to them she gave her unconditional love.    In later years, when Ginny’s dad had passed away and her mom struggled with some health issues, Ginny moved to a home in Lexington where she lived for over 24 years. The home was filled with love from her caretakers and her roommates.

Ginny attended the Day Hab Program at the Kelliher Center.   She loved music, with her favorite singer being “Elvis Presley”.  Ginny always had her pocketbook with her, loved to read wedding magazines and had pictures of her favorite “Elvis” on the walls of her bedroom.    She had a great sense of humor and loved to tease her family members and her roommates.  Ginny will be remembered as a kind and gentle soul who lived a happy life.

Ginny was the beloved daughter of late Joseph & Rita Hayes.  Loving sister of Joseph Hayes, Jr. & his wife Tracy of Hampton, NH, Janet Bailey & her husband Gordon of Westford and Mary Hayes of North Hampton.  Proud aunt of Abigail Hayes, Kate Hutchinson Campbell, Zachary & Maxwell Lukegord and Marcy & Daniel Keegan.  Great aunt of Maggie, Quinn & Charlie Campbell.  Funeral Services will be held at the Edward V Sullivan Funeral Home, 43 Winn St., Burlington on Tuesday, March 10 at 10:15 AM.  Burial to follow in Chestnut Hill Cemetery, BURLINGTON.  In lieu of flowers, memorials in Ginny’s name may be made to Eliot Community Human Services, 125 Hartwell Ave., Lexington, MA 02421.  The donations will be for the staff and residents of Sunnyknoll Terrace in Lexington where Ginny lived for many years.

Share Your Memory of
Virginia
Upload Your Memory View All Memories
Be the first to upload a memory!