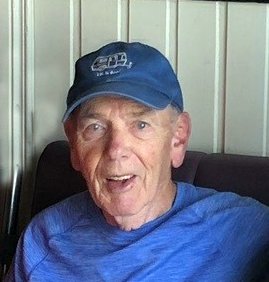 John D. “Jack” Stanley, a man who embraced life and its challenges passed away after an extended illness with his family at his bedside on Saturday morning, April 4, 2020.  He was 86 years old.  Jack was born in Boston.  He was one of 4 sons born to William and Mildred Stanley.  He grew up in a modest home in Charlestown and was a graduate of Charlestown High School.  As a child, his family was thankful for what they had and there was no such thing as waste.  It was this upbringing that helped forge the man he would become; independent, resourceful, and hardworking.  He would be just as happy eating peanut butter sandwiches and Spaghetti O’s as a fancy piece of steak.  Or at least that was the appearance he wanted to present!  He chose to serve his country in the Air Force during the Korean War. He enlisted at the age of 17 and served from 1951 to 1955.  He held the rank of Airman First Class and found his niche in radio electronics.  He was stationed at Air Force Bases in Iceland, Germany, and Texas. Jack had special memories of living with his German host family in the field. His last assignment was as a member of the 3510th Squadron in Randolph Texas. His experience in the Air Force helped launch his future in electronics.

Jack combined what he learned in the military with his engineering education from Northeastern University to guide his career path, juggling work during the day and school at night.  He worked at E.G.G. as an Electronics Engineer.  He then moved to Polaroid.  During his over 25 years at Polaroid, he worked mainly at their Waltham campus maintaining and repairing its manufacturing equipment used in the film production.  He had a keen analytical mind that could look at a problem and come up with a solution that could be either inside or outside the box of traditional thinkers.  He loved those type of challenges.  Jack also developed lifelong friendships with his coworkers.  They enjoyed the comradery in and out of work.  Many of his closest friendships came as a result of working at Polaroid.

Jack was always on the go and pursued his interests with passion. If he was going to do something, he was “all in”.  He didn’t just jog, he ran road races.  He loved a competitive game of tennis.  He didn’t just go for walks; he was a hiker and sometimes an extreme hiker!  He hiked with his children and friends all over the White Mountains of New Hampshire, sometimes staying overnight at AMC huts on the trails.  He also hiked the Grand Canyon several times with his friends and children.  His last Grand Canyon hike was at the age of 70.  He didn’t just ride a bike for fun.  He would ride to Nova Scotia, Canada with his children.  He played competitive softball and volleyball well into his 80s, and skied into his late 70’s.  He went bungee jumping at the age of 83, while on vacation in New Zealand.  His children got a kick out of him having to remove his dentures and hearing aids before jumping – not typical concerns of your average bungee jumper. Jack and his grandson, who was only 10, were the oldest and youngest jumpers of the day and received the loudest hoots and hollers from the crowd.

A “lifetime member” of the R.C. Flyers Club in Burlington, Jack loved building his planes from kits or from scratch during the winter months and flying them as soon as weather allowed.  He held almost all the positions in the club including president numerous times. In recent years, he was happy hustling his friends in spirited game of pool. All you had to say to Jack was that something was outside his abilities, and he took it as a personal challenge (and usually won!).

Jack was an incredible inspiration to his family.  His children grew up with the idea that nothing was impossible if you put your heart and soul into something you love.  Jack undertook many of his adventures with his children, and those memories will remain with them forever.  He helped his children believe in themselves, which has guided them in their life decisions.  He wasn’t a mushy sentimentalist.  It was those times on the hiking trails, slopes, and on the roads that his children really connected and bonded with him. Jack’s soulmate was his beloved Dot.  Opposites really do attract. They met at a square dance and have shared 60 years of marriage.  They made their home in Burlington for 55 years. They have raised their children together and experienced many adventures.  They travelled cross country sleeping in a tent, and supported each other in their interests and dreams.  If it were not for Dot’s influence, Jack could have easily been living out in the woods off the grid.  It was Dot whose sway led to their vacation homes in Campton and Ashland, NH, getaways that helped to keep their family close.  And it was Jack’s influence that constantly pushed Dot outside her comfort zone to see the world.  It was amazing how Jack transformed when he became a grandfather.  The dry witted outdoorsman was a big softie inside.  He doted over his grandchildren, and in their presence his gruff exterior was no more.  Like everything in Jack’s life, he didn’t take cancer lying down.  He fought and won many rounds, enjoying his adventures whenever health allowed, squeezing in those beloved travels to New Zealand, Glacier National Park, and visiting the sites of his Irish grandparents. In his final days, he was comforted that his family from all across the country could be with him.

Jack was the devoted husband of Dorothy M. “Dot” (Benoit). He was the loving father of Paula Swensen of Boise, ID & her late husband Daniel, Christine Gibson & her husband Charles of Milford, NH, David of Olympia, WA, Mark & his wife Cynthia of Arlington, VA, and Derek Stanley-Hunt & his husband Douglas of Seattle, WA. He was the proud and doting grandfather of Rebecca, Sarah, & Thomas Gibson, Caili Stanley, and Kepler, Anton, & Cordelia Stanley-Hunt.  He was the brother of the late William, George, and Paul Stanley. Jack was also survived by many brother and sisters-in-law, nieces, nephews, and friends. Due to the corona virus crisis, a celebration of Jack’s life will be planned at a later date.  In lieu of flowers, memorials may be made to People Helping People, P.O. Box 343, Burlington, MA 01803 or New England Shelter for Homeless Veterans, 17 Court St., Boston, MA 02108 or www.nechv.org. For obituary, online guest book, and tribute video see www.sullivanfuneralhome.net.  Arrangements by the Edward V. Sullivan Funeral Home, Burlington.