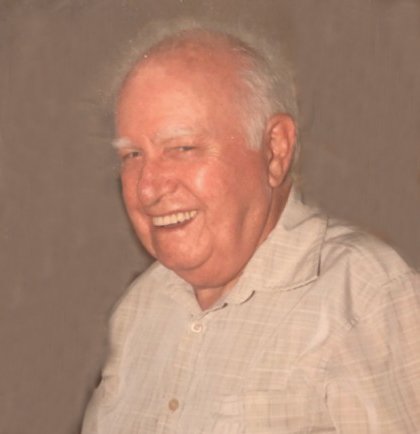 The above LINK will become "active" when the service is available for viewing (at approx 10:30, Thursday April 23).

William Frederick “Bill” Ganshirt, aged 93 years, of Billerica, formerly of Burlington and Harwich passed on April 18, 2020.  Born to parents William and Blondina (Winter) Ganshirt in Boston on May 22,1926.

For 42 years he was the loving husband of the late Sarah Pauline (Forbrigger), married on October 16th,1954 at Blessed Sacrament church in Jamaica Plain, Massachusetts.  Also wedded to the deceased Carolyn (Struzziero) (Nardone) in 1999.

Bill entered service in the United States Navy as an Electrician’s Mate, Third Class, in January 1944 and served until his honorable discharge in May 1946, following the close of World War II. Upon his return from England, he soon started a 42-year career at the New England Telephone Company.

Bill was a devoted father who was always available to his children, readily offering a kind word of gentle encouragement. He was well loved for his soft spoken, mild-mannered approach to life, for his generosity and for his natural kindness.  It was frequently said of Bill that he “didn’t have a mean bone in his body”.

Always something of an auto enthusiast, minus the fancy or sporty cars, Bill devoted hours to keeping his cars well-maintained and shined-up. He was also particularly fond of keeping his lawn and gardens in tiptop shape.  Puttering around the yard, keeping the bird feeders topped up, and mowing the grass were among his favorite activities. In retirement, Bill enjoyed riding his bicycle along the rail trails on Cape Cod, spending time outside, and going to the gym, as well as visiting with family.  For some years in retirement, Bill was devoted to service by driving less-able seniors in and around Harwich.

Bill will be greatly missed by his family and friends.

In lieu of flowers memorials in Bill’s name may be made to Alzheimer’s Association, MA Chapter, 309 Waverley Oaks Road, Waltham, MA 02452  www.alz.org