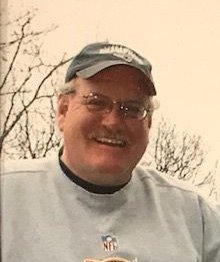 Click on this link to view the Funeral Mass

Clicking on the above LINK will bring you to our facebook page (sign-in is not required) to view the Funeral Mass at 10 AM on Tuesday, Sept. 22

Richard James Cross, a Walgreens Manager, passed away suddenly on September 15, 2020.  He was 61 years old.  Rick grew up in Burlington and was a graduate of Burlington High School Class of 1977 where he was a member of the high school football team.  He furthered his education earning an Associate’s Degree in Accounting and a Bachelor’s Degree in Marketing from Bentley College.  Rick’s work career started at the local record stores, Strawberries, Tower Records, and Record Town. He then took a manager’s position at Walgreens where he has worked for the past 23 years.  He has worked in several locations in New Hampshire including Nashua, Hamden, Exeter, and Raymond

Rick was a huge sports fan.  He played golf and he followed all the Boston Sports teams.  But the New England Patriots was his most beloved team.  It was a love he shared with all his family and friends.  He and his father shared season tickets for many years going back to the days of Sullivan Stadium.  He was one of the diehard fans to actually be present at Gillette Stadium for the famous “Snow Bowl Game”.  He was fortunate to have been able to get tickets for the Patriots vs Giants Superbowl matchup in Arizona.  To the demise of all Patriots Fans, the Giant’s Tyree’s amazing/lucky “Helmet Catch” and the 17-14 Giant’s victory wasn’t what Rick was hoping for, but the experience was something he talked about for the next 13 years.  Sharing his love of the Patriots with his father, siblings, and friends is something that kept all of them connected.

Outside of the football season and post season player trades and contracts, Rick enjoyed old and new films.  He was an avid reader enjoying both historical and spy fiction genres.  His favorite authors were Tom Clancy and Stephen King.    He enjoyed traveling.  Among his favorite destinations were a trip to Scotland where he enjoyed Golf and Distillery tours with his buddy Alan, as well as the Caribbean cruise he took with his parents. His family and friends will remember Rick for his jovial personality, his distinctive laugh, the enthusiasm he displayed during a game, and the genuine kindness and love he bestowed upon his family and friends.

Richard was the beloved son of Francis & Mary Lou (Kiley) Cross of Tewksbury, formerly of Burlington. He was the loving brother of Stephen Cross & his wife Linda of Boynton Beach, FL, Lisa Goguen & her husband Dennis of Andover, Sheila Cross-Lunde of North Attleborough, Ann Thompson & her husband Michael of Woburn, Peter Cross of Woburn, and Michael Cross & his wife Lisa of Middleton. He was the uncle of 15 nieces and nephews and 7 grand nieces and nephews.  He was the beloved grandson of the late Richard & Mary (Casey) Kiley and Gertrude (Cross) & James McGurl.

A visitation will be held at the Edward V. Sullivan Funeral Home, 43 Winn St., Burlington (exit 34 off Rt. 128/95, Woburn side) on Monday, September 21 from 4-7 p.m. A mass of Christian burial at St. Margaret’s Church of St. Veronica Parish, 111 Winn St., Burlington, MA on Tuesday, Sept. 22 at 10 a.m. Services will conclude with a burial at Chestnut Hill Cemetery, Burlington. For directions, obituary, online guestbook, video tribute, and online streaming of the funeral mass see www.sullivanfuneralhome.net or directions see www.burlingtoncatholicma.org