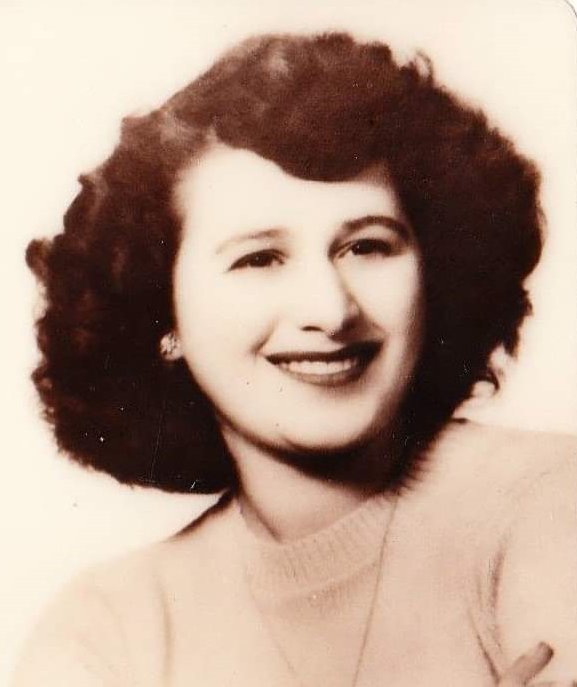 Obituary of Stella A Guarino

Click on this link to view the Funeral Mass for Stella on Monday, January 4th at 10 a.m.

The link (above) will bring you to our facebook page (sign-in is not required) to view Stella's funeral mass.  Live stream will begin shortly before 10am on Monday, January 4th.

Guarino, Stefana “Stella” A. (Bono) of Woburn, formerly of Medford, at the age of 94, Dec. 28, 2020. Beloved wife of 70 years to Gerald. Loving mother of Vincent of Hudson, NH, Raymond and his wife Tina of Nashua, NH, Gerald, Jr. and his wife Denise of Woburn, Maria Hudson and her husband Raymond of Burlington, Stephanie Hewett and her husband Patrick of Bellingham, and mother-in-law of Susan Guarino of Portsmouth, NH. Stella is the loving grandmother of 12 and great-grandmother of 9. She is the sister of Rena Geany of Medford, Jenny Cobuccio of Medford and the late Josephine Rago, Theresa Jean, and Vincent and Michael Bono, and she leaves many nieces and nephews.

Stella was a communicant at the Sacred Heart Church in Boston, where she received her sacraments, including marriage. She raised her family at the Immaculate Conception Parish in Malden, where she first began teaching religious instruction in the 1970s to both her daughters and their classmates. Through the 1980s, she also served as a Lector and Eucaristic Minister at the Immaculate Conception, and later in the 1990s, at Saint Barbara’s Church in Woburn, where she would eventually teach her granddaughters religious education as well. In the 2000s, Stella completed a term as the president of the Woman’s Club at the Sacred Heart Church in Lexington, where she remained active as a volunteer and member for many years. Stella also served Father McDonough’s healing ministry prayer line. As fulfilling as her contributions to the church were, her life’s passion was always her family; her children, grandchildren, and great-grandchildren, which included babysitting at a moment’s notice, perfecting new recipes and sharing her meals, opening her home for countless holiday celebrations, as well as summer gatherings at Swifts Beach in Wareham. You could always drop in and rest-assured, she was prepared to whip-up a hearty and delicious meal, served with a warm smile.

Stella was one of seven children born to Italian Immigrants, the late Raimondo and Filomena Bono. Stella grew up in the North End of Boston. Her dad supported the family as a fisherman and her brothers followed in the family tradition. When she was in her teens her family moved to Medford; however, Stella’s heart and all her friendships were still in the North End of Boston. She would take the streetcar daily, traveling back to the North End to be with her friends. They enjoyed many outings together with one of their most memorable moments, attending a Frank Sinatra concert. Her first job was working at Donna Deane’s Candy Factory on Medford Street in Boston. She would meet her future husband, Jerry, when she was maid of honor and he was best man for mutual friends. They married on October 1, 1950.

Stella and Jerry bought their first home in Medford, right around the corner from her parents. It was a wonderful neighborhood to raise their five children. Her children could see their grandparents, aunts, uncles, and cousins daily. Stella was a quiet woman who was always there for her family. If her children had a problem or a concern, Stella would take the time, listen to them, and help come up with a resolution to the problem. She was the disciplinarian in the family, but a fair one. Stella was a role model for her children and grandchildren, instilling in them the values of patience, kindness, strength, and the importance of family.

In the late 1970s, Stella and Jerry purchased a summer home in Wareham. It was and still is a gathering spot for all the Guarino family. Stella and Jerry moved to Woburn in 1990 and settled close to their son Jerry Jr., once again creating a close family unit. Stella is a woman of faith. Wherever she lived, her church became an important part of her life.

Stella’s grandchildren and great grandchildren are her greatest joy. She made them each feel as if they were her favorite. Stella’s life is the greatest legacy that she will leave to her family. It is a life of love, family, strength, and faith.

Visiting hours will be held at the Edward V. Sullivan Funeral Home, 43 Winn St., Burlington (Exit 34 off Rt. 128/95 Woburn side) on Sunday, Jan. 3 from 2-4 p.m. A Mass of Christian Burial will be held at St. Malachy Church in St. Veronica Parish, www.stveronica.org, 99 Bedford St., Burlington on Monday, Jan. 4 at 10 a.m. Relatives & friends are respectfully invited to attend. Burial will follow in Woodbrook Cemetery, Woburn. Memorials in Stella’s name may be made to the American Heart Association www.heart.org or Alzheimer’s Association www.alz.org/manh. For directions, obituary, online guestbook, memorial video and live-stream of the Mass see www.sullivanfuneralhome.net

Share Your Memory of
Stella
Upload Your Memory View All Memories
Be the first to upload a memory!