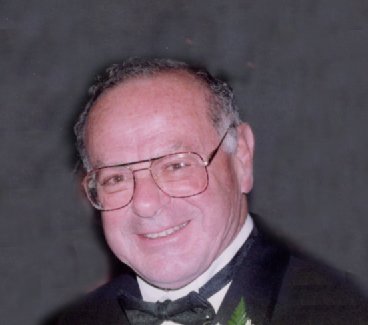 This link will bring you to the Live Stream of the Funeral Mass.

Edward Alfano, a retired bank manager and loan officer, passed away after an extended illness at his home with his wife at his bedside on Monday morning, February 1, 2021.  He was 96 years old.  Edward was born in Boston.  He was one of three children born to Pasquale and Susan Alfano.  He grew up in Arlington and was a graduate of Arlington High School class of 1942.  He met his future wife, Norma Ciccio, at a New Year’s Eve celebration and they were married on June 6, 1954.  They lived in Everett for a few years until they purchased their family home in Burlington in 1960.  Over the years, he expanded their home up and out to make it his forever home.  Edward had a diverse career.  He started with Eastern Airlines and next worked for Rust Craft Greeting Cards.  He returned to the airline industry next working as a manager at Lufthansa and Alitalia Airlines.   He later took a manager’s position at a fledgling rental car company called Avis.  He ended his career in the banking industry working at Suburban Credit Union which later became Metro Credit Union where he worked as a Branch Manager and Loan Officer.  Edward’s ability to work with others, warm personality, and ability to get the job done made him well loved and appreciated by his employees, customers, and management.

Edward loved being active, involved in his community, and spending time with family and friends.  He had a love for freshwater and saltwater fishering.    He loved animals and enjoyed watching and feeding backyard birds.  He was a passionate golfer who played into his 90’s.  When he was in his 70’s and on his birthday at the Sagamore Country Club, he was one of those lucky golfers to get a “Hole-In-One”!  He was also a faithful fan to all Boston sports.  He coached baseball for many years and was a supportive hockey dad.  He was a long-time member and past president of the Burlington Son’s of Italy.  He served on the Town of Burlington Personnel Board for a number of years. What he enjoyed most was being a fun, caring, and loving husband, father, brother, grandfather, and great grandfather.  All of his family remembers that he was always upbeat, happy, and smiling.  He was known for his quick wit and was referred to as the consummate story teller.   He had an arsenal of jokes, stories, and shenanigans that kept his family on their toes and laughing.  He loved singing songs and playing his harmonica on special occasions.  There have been decades of family summer vacations spent in Stowe, Vermont.  Edward was a shining light who brightened the lives of everyone he touched. He embraced life, had a strong faith, and loved his family with his entire being.  He will be missed, but never forgotten.

Edward was the beloved husband of 66 years of Norma (Ciccio) Alfano.  He was the loving father of Deborah Perriello & her husband Alfred of Burlington, Edward “Ted” Alfano, Jr. & his wife Lisa of Essex, and Julie Caterino & her husband Ronald of N. Andover. He was predeceased by his siblings; Vincent Alfano and Jeannette Brown.  He was the proud grandfather of Proud grandfather of Gioia, Christopher & Jonathan Perriello, Annemarie Alfano, Eric, Lauren, & Nicole LaPointe, and Matthew & Emily Caterino. He was the great grandfather of Corey, Liliana, Violet, Lucy, Griffin, and Liza Perriello.

Visiting hours will be held at the Edward V. Sullivan Funeral Home, 43 Winn St., Burlington (exit 34 off Rt. 128/95, Woburn side) on Friday February 5 from 5-7 p.m. A Mass of Christian Burial will be celebrated at St. Margaret Church in St. Veronica Parish, www.stveronicama.org, 111 Winn St., Burlington on Saturday February 6 at 10 a.m. Services will conclude with a burial in Pine Haven Cemetery, Burlington. Memorials in Edward’s name may be made to St. Veronica Parish, 111 Winn St., Burlington, MA 01803.   Due to Covid-19 restrictions, a Celebration of Edward’s life is planned for a future date for family and friends.