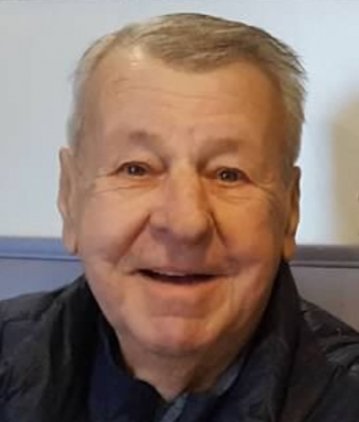 Click on this link to view the live stream of the Private Funeral Service.

The LINK (above) will bring you to our facebook page (sign in is NOT required) to view the private funeral service.  A live-stream will begin a few minutes before the start of the funeral on Saturday, April 17 at 2:30 p.m.

Joseph C. Arsenault passed away at Marlborough Hospital on Monday morning, April 12, 2021.  He was 81 years old.

Joe was born, raised, and educated on Prince Edward Island in Canada. He was one of eight children born to the late Arcade and Anna Arsenault.  With its beautiful beaches, lighthouses, and farmland it was a beautiful place to grow up. However, there were limited employment opportunities, so at the age of 18 Joe moved to the United States to live with his sister Lorraine DeCristoforo.   Joe settled in Revere and raised his family in East Boston before moving to Peabody.    He had a career in the Lumber Industry. His first job was at Liverpool Lumber in East Boston.  For 25 years he worked at Somerville Lumber as a Manager.  After Somerville Lumber closed their doors, he went to work for 22 years at Gilbert & Cole in Marblehead.   Joe was a “jack of all trades” at Gilbert & Cole. He opened the door to the business every morning, shoveled the entrance way when there was snow – you name it he did it!  Joe was still working at the age of 80, retiring when the pandemic hit in 2020.  Joe lived to work. With his outgoing personality and easy-going demeanor, life in retail was perfect for him.   Joe could strike up a conversation with anyone.  Within minutes of meeting Joe, you would feel like you had known him forever.

Joe never forgot his family or his Canadian roots. He took a two-week vacation back to Prince Edward Island every year and many times his children would join him.   Joe was a loving and supportive dad to his three children who fondly remember the childhood visits to Aunt Lorraine’s and to Aunt Nora’s and the outings going bowling, ice skating, cruising Revere Beach in the convertible or visits to The French Club.  If we called, he was there.   Nothing made him happier than spending time with his grandchildren. They were his pride and joy.

Joe will be remembered as an outgoing and happy man who always had an optimistic outlook on life.

Joe was the beloved father of Suzanne Parsons & her husband Jeff of Marlborough, formerly of Grafton, Carol Mancini & her husband Mark of East Waterboro, ME and John Arsenault of East Waterboro, ME.  Proud grandfather of Robert, Nicole & Samantha Parsons and Aidan Mancini.  Brother of Lorraine DeCristoforo & her late husband Dom of Revere, Earle of Canada, Cleone Harvey & her late husband John of Canada, Velma Levesque & her late husband Luc of Canada, Paul & his late wife Frances of Canada and the late Melvin & his late wife Lorraine, the late Norma Woodman & her late husband Gordon. Joe is also survived by many nieces and nephews.   A visitation will be held at the Edward V Sullivan Funeral Home, 43 Winn St., BURLINGTON on Saturday, April 17 from 3-5.  Relatives & friends respectfully invited to attend.  Private Funeral Services will be held at 2:30 p.m. and will be live streamed for relatives & friends to view by going to the Sullivan Funeral Home website and going to Joe’s obituary.   The family would like to thank the staff at Marlborough Hospital for their compassionate care.  In lieu of flowers, memorials in Joe’s name may be made to American Diabetes Association, PO Box 7023, Merrifield, VA 22116-7023 www.diabetes.org

Thank you to all our friends and family who have joined us from afar to say so long but not goodbye.

To all my Dad’s coworkers from Somerville Lumber and Gilbert & Cole.  A good day’s work was very important to him.  So important, he continued working as an 80-year-old.  He spoke very fondly of his time at Somerville Lumber and was honored to work for Harold Cohen.  The Gilbert & Cole teammates were his family for the past 22 years.  The customers and the neighbors, and of course the neighbor’s dogs were his extended family.  Because of this family, and the many hungry dogs, it was impossible for him to retire.   On his days off, he found ways to fill the time: of course – going out to breakfast to check in with all his beautiful girls, driving to East Boston to the same barber who has been cutting his hair for 50 years, going grocery shopping or to the mall to buy one of the many jackets he had – it was an addiction for him, or visiting Lorraine and Dom and their extended family in Revere.  To his work family – thank you, Joe loved you.

To my Dad’s sisters and brothers and their spouses, and to his many nieces and nephews, it brought him such joy to see you, spend time with you, share stories with you and make memories with you.  He was so happy to have Lorraine and Dom and their family close by in Revere where he would visit often and would certainly leave with a few of Lorraine’s meatballs!  It was a mission to him to make sure he made it home every year.  He would usually drive straight through to Velma & Luc’s house which was a 10-hour drive.  He was always impressed with Velma’s impeccably kept house, probably because he was a poor housekeeper.  After catching up with Velma & Luc, he would head to the island with a first stop at Melvin and Lorraine’s – or as he fondly called her St. Lorraine.  Of course, he also loved her cooking.  Then it was off to Paul & Frances’ house, which was also the house he grew up in.  He loved the cookouts, of course because it involved food, but also because the extended family would come by to visit.  When he and Paul needed a break from each other, he would stay with Earle and they would travel the island visiting dear friends and relatives.  Many of his visits also coincided with his sister Cleone’s visits to the island.  Upon his return, we got to hear an update on everyone’s life in PEI!  Many years ago, Dad told me he was going to drive to Calgary to see his sister Norma and her husband Woody.  Now my Dad had never been on a plane so driving was the way to go.  I really do not think he realized that it would take him several days of driving to get there.  I finally convinced him to fly, bought the ticket and drove him to the airport.  I assured him that I had spoken to Woody and that Woody would be sure to pick him up at the airport.  He had the time of his life – visiting with his sister Norma’s family, experiencing the Calgary Stampede and Banff National Park.

To our family – thank you, Clarence loved you.

To my sister Carol and my brother John, while our parents were divorced before we could barely remember, Daddy lived only a block away and was sure to pick us up every Sunday for visits to Uncle Dom and Aunt Lorraine’s or to Aunt Nora’s and Uncle Allaire’s.  We loved visiting Aunt Lorraine’s because there were always cookies and Aunt Nora’s because she always gave us a quarter.  We would also go bowling and ice skating or out to a restaurant.  There were times we would cruise Revere Beach in the convertible.  There were also times we visited the French Club in Chelsea.  Remember we could not tell Ma when we went there because it was a bar and because they had the one-armed bandits that we weren’t supposed to be exposed to.

We also had many excursions to PEI.  I remember my Dad would put a piece of plywood down on the back seat, cover it with blankets and this is where we would sleep for the ride up to PEI.  And just think, we lived to tell about it.  It was wonderful for us to discover the island and to become instant friends again with our cousins.  Many years later, we went with our spouses and our children, renting 2 houses side by side.  That was truly a trip that will forever be remembered for the fun and love we shared with our island family.

To our spouses, Jeff and Mark – know that my Dad did not think Carol and I could have chosen better partners than we did.  He thought the world of the both of you and you could do no wrong in his eyes.  You two were THE BEST!

While Daddy wasn’t necessarily the most demonstrative in his affection, he showed his love by being there when we needed him, giving money when we needed it, driving up to Maine to spend time with you for breakfast or lunch, or driving to Grafton for a cookout or to just sit by the pool for a visit.  Please know that these past several months, he expressed to me his joy in traveling to Maine to have breakfast with Carol and how he loved his visits from John where they just sat and talked and caught up on each other’s lives.

Know that Daddy loved you!

To Aidan, Dad’s bonus grandson.  Dad loved getting to know you on our trip to PEI.  He thought you were a beautiful, inquisitive and wonderful child and that you have grown into a sweet, talented, and wonderful young man.

Know that Papa loved you!

To Robert, Nicole and Samantha – Papa was very excited and proud to become a grandfather!  When he would walk through the door, his face would light up, knowing that he was going to spend a few hours with you.  He loved attending your sporting events, your dance recitals, your plays and your graduations.  Your pictures were always in his wallet, ready to be shown to anyone with pride and love in his heart.  We were so lucky that he joined us for all the holidays and several times over the summer for parties and cookouts.  We even got him on a plane to travel with us to Disney World.  I remember one day when he did not want to visit the parks, we left him at the ESPN Sports Bar so that he could watch whatever baseball games were on TV.  When we returned a few hours later, Joe knew everyone at the bar.  As we were leaving, everyone waved and said goodbye.  It brought him such joy to share in this fun with his family.  Papa was always ready to offer you some money for gas, meals or to have fun with your friends, however, when I held out my hand, he responded with a laugh or on special occasions, I would receive a dollar.

Be sure to remember Papa for all the laughs and good times we shared with him.