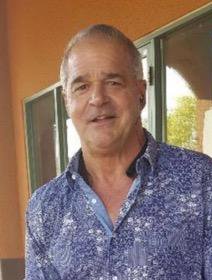 Clicking on the link (above) will bring you to our facebook page (sign-in is NOT required).  A live-stream of the funeral mass will begin shortly before noon on June 7th.

Paul Scott Faretra passed away unexpectedly at St. Rose Hospital in Las Vegas on May 25, 2021.  Paul was 65 years old.

Paul was born in Winchester. He was raised in the Winmere section of Burlington.  He started his high school education at St. John’s Prep in Danvers and then transferred to Burlington High School where he graduated from in 1974.  While in high school he was a member of the Burlington High varsity football team. He went onto graduate from Dallas College.    Paul lived in California and Texas before moving to Las Vegas where he had resided for the last 10 years.  Paul had a long and successful career as a Mortgage Broker.   While living in Texas he was the Founder and Managing Director of Texstar Lending, LLC. He had most recently been working as a loan officer at Geneva Financial in Nevada.

Paul had a huge heart. There wasn’t anything he wouldn’t do for a member of his family.  When his dad Gaetano was ill he moved home and cared for his dad for two years until his passing in 2011.  He had an extremely close relationship with his mom and would call her quite often.  He purchased his mom a condo in Largo Florida so she could enjoy her “golden years”.  Paul wouldn’t think twice about sending money to his nieces and nephews to help them pay for the schooling. He even took a few of his nieces, nephews, and his dad on a memorable trip to Italy.  He was always looking out for others including his nieces, nephews, and his friends’ children.

Paul was proud to be a recovering alcoholic for over 30 years and a faithful member of A.A.  He considered the members of the organization like a part of his family, and he took great pride in helping other members with their addiction and challenges.

Paul was the beloved son of Shirley L. (Koontz) Faretra of Woburn and the late Gaetano Faretra.  He was the loving brother of Diane Faretra of Woburn, Craig Faretra of Hampton, NH and Guy Faretra of Westford.   He was predeceased by his twin brother Thomas Faretra and his brother Gary Faretra.   Paul is also survived by many nieces, nephews, and loving friends in Las Vegas.  A Mass of Christian Burial will be held at St. Margaret’s Church, in St. Veronica Parish, www.stveronicama.org, 111 Winn St., Burlington on Monday June 7th at Noon.  Relatives & friends respectfully invited to attend. Burial will follow in Oak Grove Cemetery, Medford.     In lieu of flowers memorials in Paul’s name may be made to A.A. Las Vegas Central Office, 1515 East Tropicana Ave., Suite 710, Las Vegas, Nevada 89119 www.lvcentraloffice.org

Share Your Memory of
Paul
Upload Your Memory View All Memories
Be the first to upload a memory!