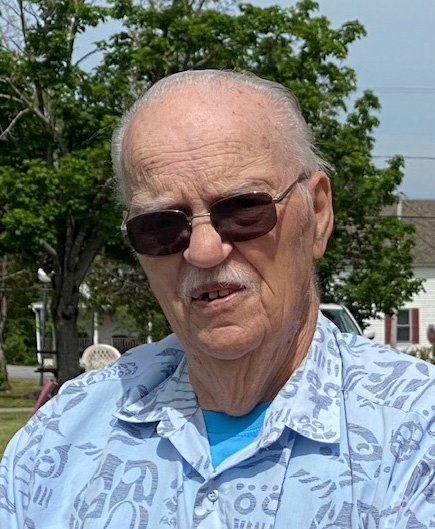 Ernest M. Barkhouse passed away at the Franklin Regional Hospital in Franklin, New Hampshire, on Sunday, June 20, 2021.  The beloved husband of 66 years to Marybeth (Foley), he was 86 years old
.

Ernie was born in Nashua, New Hampshire.  He was raised and educated in Pepperell where he met his future wife Marybeth Foley.  Shortly after graduation from high school Ernie enlisted in the United States Navy. He served his country during the Korean War from 1952 – 1956, of those 4 year 2 were served overseas.   Ernie and Marybeth then married on May 7, 1955, where they lived in Watertown for six years before settling in Burlington in 1962.

Ernie had a long and distinguished career of over 40 years as a Senior Support Computer Technician at IBM.  He loved his job and installed computer systems and many big projects in and around the Boston area.  He made many lifelong friendships at IBM and enjoyed traveling to the Florida Keys every April to go deep sea fishing together.

When their sons Michael and Carl were young Ernie and Marybeth would take their summer vacations on Cape Cod.  In 1972 they purchased their dream vacation home in Franklin, New Hampshire. The home has a spectacular view of Webster Lake and they enjoyed boating, jet skiing and all the fun activities that were at the lake.   His lake home was his passion.  Nothing made Ernie happier than the four months each year that he and his family would spend at their lake home.

Ernie was a very handy man and a talented carpenter.  He helped reconstruct his lake home in New Hampshire and did many home improvement projects at his home in Burlington.  Ernie loved going for walks and was always willing to help any neighbor that needed it. He enjoyed his hobbies of building his own boats and remote-control airplanes.

Ernie will be remembered as a quiet, low key man, with a good sense of humor who always went out of his way to help others.

Ernest was the beloved husband of Marybeth (Foley).  Loving father of Michael Barkhouse & his wife Melanie of Woburn and Carl Barkhouse & his wife Suzanne of Bedford.  Proud grandfather of Samantha Greaves & her husband Michael and Nikolas Barkhouse.   Great grandfather of Jacob & Dylan.  Brother of the late Emory & John Barkhouse.  Visiting hours will be held at the Edward V Sullivan Funeral Home, 43 Winn St., BURLINGTON on Thursday, June 24 from 4-7 p.m.  Funeral Services will be held at the Funeral Home on Friday, June 25 at 10 a.m.  Burial to follow in Chestnut Hill Cemetery, Burlington.  In lieu of flowers memorials in Ernie’s name may be made to The Webster Lake Association, PO Box 44, Franklin, NH 03235.

Share Your Memory of
Ernest
Upload Your Memory View All Memories
Be the first to upload a memory!
Share A Memory