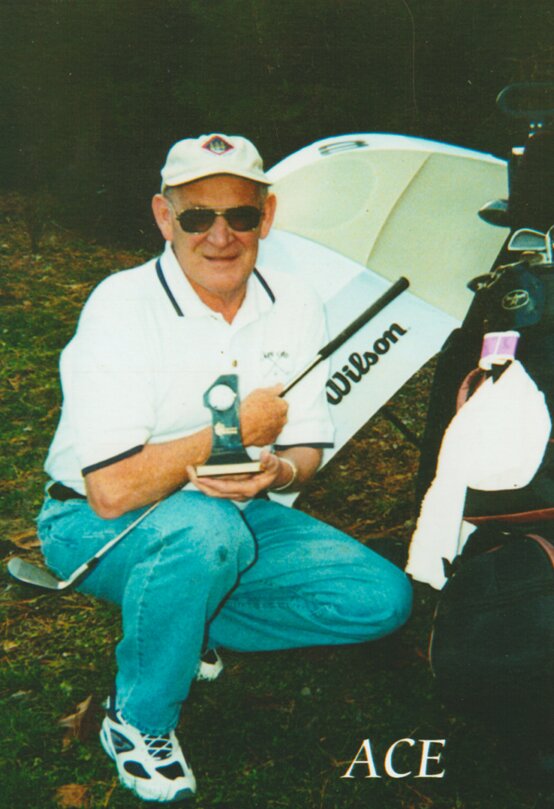 Richard W. “Ace” Freeman, retired owner of R.W. Freeman Associates, passed away peacefully on Saturday morning, September 5, 2021.  He was 87 years old.  Richard was born in Boston.  He was the son of Walter and Evangeline Freeman.  He grew up and was educated in Watertown.  It was at Watertown High School that he met his future wife, Joye Anne Freeman, who because they had the same last name, sat in front of him in homeroom.  At first, he was the distracting boy who sat behind her.  But eventually a relationship developed, and they started dating.  They married when they were still teenagers.  They rented in Watertown  for a spell before buying their one and only home on Ellen Road in Burlington in 1958.  He started his work career at Raytheon and then worked at Burwen Labs in Burlington as a design engineer for many years.  It was with Burwen Labs that Richard developed his talents in the design and production of the new technology of printed circuit boards.  When Burwen Labs closed, he started his own company, R.W. Freeman Associates in Burlington where he was the design engineer for printed circuit boards. Not only did he design the printed circuit boards but he also did the sales and accounting work. To help in the business and to keep current in technology he went back to school attending Middlesex Community College and graduated with high honors.  He semi-retired at the age of 55 and began to spend more time following his passions.

Richard was a man who could never say “no”.  Whatever he did, he always seemed to work his way up to leadership roles.  He was deeply involved in Burlington’s Boy Scout program when his son, Jimmy, was involved and helped with the administration, events, and newsletter.  He was also a Little League umpire for quite a few years for the Burlington Baseball Association.  When his son was the pitcher of a game he was umpiring he would always tell him ‘please don’t call me Dad’. He was an avid Candlepin bowler and served as secretary and president of the league numerous times.  He and his family enjoyed camping. For years, they hit the road every Friday evening after work and traveled all over New England and the east coast pulling their tent trailer.  Eventually establishing roots at the LenKay Campground in Barrington, New Hampshire.  He loved being outdoors, giving his children new experiences, the comradery shared with fellow campers.  Somehow he even became responsible for producing the newsletter for the New England Camping Association.  He also played adult softball with his co-workers and friends for many years.  In his later years, he took up golf as a way of keeping active and socializing with friends.  He would play a wide variety of course around the area.  At the age of 60, he was one of those talented or extremely lucky golfers who managed to get a “Hole-in-One”.  This happened on the 5th hole of the Billerica Country Club.  He also loved following all of Boston’s professional sports teams.

He especially enjoyed our Martha’s Vineyard family vacations. For the last 39 years, our large family would come together for a week of fun, beach, shopping, and Dairy Queen. He loved taking everybody on island tours and telling stories of his experiences. When not on Martha’s Vineyard, he loved having cookouts, birthday parties, and anniversaries at his pool with family and friends which was almost every Sunday. He was very proud of his beautiful pool and backyard and took care of it like it was his baby.

Richard was a hard-working man.  He was a wonderful provider to his family and a supportive and caring husband to his wife.  He will be remembered for always placing others first, willing to lend a helping hand, playing kickball and wiffle ball with all the neighborhood kids.  He was kind, funny, and filled with love.

Richard was the beloved husband of the late Joye Anne (Freeman) Freeman who passed in 2004.  He was the loving father of James W. of Waterville, ME, Linda J Sandmann & her husband Robert of Pepperell, Judy A Johnson & her husband Bennie of Manchester, NH. He was the thoughtful brother of Bill Malley of Richmond, WA, Raymond Malley of Hanover, NH, Bob Freeman of Woburn, Kenny Freeman of Waltham, the late Audrey Malley and Patsy DeRosa.   He was an extremely proud grandfather of Kara Sandmann, Nicole Sandmann-Metsch, Kim MacInnis, and Richie Johnson.  He was the great grandfather of Tayla, Kasey, Bradley, Tyler, Lexi, Kelly, and Matthew.  He was also survived by many nieces, nephews, and friends.

Visiting hours will be held at the Edward V. Sullivan Funeral Home, 43 Winn St., Burlington on Wednesday, Sept. 8 from 6-8 p.m. Funeral Services will be held at the Sullivan Funeral Home on Thursday Sept. 9 at 11 a.m. and will conclude with a burial in Pine Haven Cemetery, Burlington. Memorials in Richard’s name may be made to the American Heart Association, 300 5th Ave, Waltham, MA 02451 or www.heart.org. For directions, obituary, online guestbook, and video tribute see www.sullivanfuneralhome.net