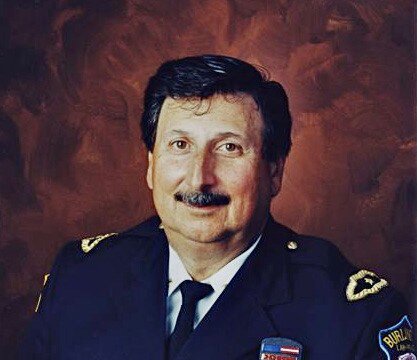 4:15 pm - 4:45 pm
Edward V. Sullivan Funeral Home
43 Winn Street
Burlington, Massachusetts, United States
781-272-0050
There will be a police walk-through for all current and retired members of the Burlington Police Force.

Retired Lt. Detective Alfred Sciuto, a legend in the law enforcement field, passed away at his home, where his children wanted him to be, on Saturday evening, October 16, 2021.  The beloved husband of the late Joanne (Watkins) he was 81 years old.  Al was born, raised, and educated in Lawrence. He was one of 3 children born to the late Sebastiano & Agnes Sciuto.

Al was a graduate of Middlesex Community College and Northeastern University.  He would meet the love of his life Joanne Watkins while living in Lawrence. They married on April 30, 1960.

Al’s first job was working as a Radar Technician for Raytheon in Andover for 10 years.  Al’s dream had always been to work in Law Enforcement.  In 1970 he visited the small community of Burlington and instantly knew that this was where he wanted to work and raise his family.  At the age of 30 Al became a member of the Burlington Police Dept.  Al’s life was all about his job. He was the voice and the face of the Burlington Police Dept. for decades. He was an inspiration to the veteran officers and a role model for newer officers.   He was one of the first K-9 Officers and ended his career as a Lt. Detective running the Detective Division.  Al was an asset to the community of Burlington.  Throughout his career, and his life, Al did a lot of community outreach.  He was involved in Rape & Crime Prevention, trained police in various courses at the New England Police Training Council and was involved in the Dare Program.  He was nominated for and won Police Officer of the year and received a citation from then Governor Paul Cellucci.  Al’s reach extended well beyond Bulington. He was well known and respected among numerous police departments across the state and was an expert in Crime Prevention.

Al had a wonderful marriage to his wife Joanne. They were devoted to each other.  If you saw one you saw the other – they were always together holding hands.  They enjoyed traveling and took trips to Hawaii, Aruba, and South Carolina. They especially loved their yearly stays at the Trapp Family Lodge in Vermont.  Al loved to indulge Joanne and serve her breakfast in bed during his retirement years!  Al was a loving, generous, caring, and patient dad who would do anything for his children. He was a very involved grandfather and enjoyed spending time with his grandchildren. He taught them golfing, bowling and loved to spoil them!  Last year, during the pandemic, his family celebrated his 80th birthday with a drive by at his home.  It was a day that Al loved with many of his friends, former co-workers and neighbors stopping by to wish him a happy birthday!

Al was not one to sit idle and had many interests and hobbies. He was a social creature who simply loved to be around people and had many different circles of friends.  Al was an avid golfer and a member of the Billerica Country Club.  He enjoyed his bi-weekly card games.  If you were travelling throughout Burlington, you would find Al having a cup of coffee with his buddies at True-North Coffee Shop and on Friday evenings enjoying a cocktail with the locals at Sweet Ginger.  Al volunteered his time at the Senior Center in Burlington.   He was a longtime member of the Knights of Columbus in Burlington.

Al will be remembered as a gentle, kind man who fulfilled his dream of creating a loving family and making a difference in the community he worked and lived in.

Al was the beloved husband of the late Joanne (Watkins).  He was the loving father of Dr. Steven Sciuto & his husband Giovanni Capato of Haverhill, Sharon Sciuto-Winton of Merrimack, NH and David Sciuto & his wife Gloria of Dracut.  Proud grandfather of Brennden Winton & his wife Brittany, Christopher, Leanne, D. J. & Shannon Winton and Evan, Aiden, Alexander & Emily Sciuto.  Brother of the late Salvatore Sciuto and Grace Sciuto.  Funeral from the Edward V. Sullivan Funeral Home, 43 Winn St., BURLINGTON on Thursday, Oct. 21 at 9 a.m.  Followed by a Mass of Christian Burial at St. Margaret’s Church, in St. Veronica Parish, www.stveronicama.org, 111 Winn St., Burlington at 10 a.m.  Burial will be private. Visiting hours will be held at the Funeral Home on Wednesday, Oct. 20.   There will be a police walk-through for all current and retired members of the Burlington Police Force at 4:15 p.m.  A public visitation will be held from 5-8 p.m.  In lieu of flowers memorials in Al’s name may be made to People Helping People, PO Box 343, Burlington, MA 01803 www.peoplehelpingpeopleinc.org

On behalf of my family, I want to welcome and thank each of you for being here today in honor of an extraordinary man, my father Al. Aka Big Al. Over the past week, we’ve had literally hundreds of people reach out on social media to express their sympathy to us and their admiration of him. I know he would be humbled and grateful for this outpouring of love and kindness.

A loving husband, father and grandfather, dad was truly a family man. He and our mother had a loving marriage in which they completed each other in many ways. Over the past 16 years, since the passing of our mother, he always had fresh flowers on the fireplace mantel in front the portrait of the two of them.  He loved her with all his heart.

As father, he was always patient and generous, easy to talk to and willing to do anything to help us. He was proud of each of us, but never took credit. When told “Your kids are so nice, you did a great job”. He would say, “All the credit goes to Joanne, she did all of that. I was always working.”  But I can assure you, we would not be the people we are today without his influence. We are eternally grateful to have had him as our father and as a grandfather to our children.

He was right about always working. My father loved his job as a police officer, he was proud to serve, from patrolman, K-9 officer, sergeant to Lieutenant Detective he embraced each roll.  Police work was such a natural fit for him. He just knew how to interact with people in almost any situation to make things better.  He was indeed “All about the job” and he did it exceptionally well.

And the stories, he had millions of police stories. He loved to share them over and over again to anyone who would listen. He even told them in Burlington’s CATV. He literally became face of the BPD in the community. You couldn’t go anywhere without someone coming up to talk to him. Sometimes I would ask him “When did arrest that guy?” “How did you know?” “He called you Mr. Sciuto. Only those you arrested call you ‘Mr.’l”

This level of respect extended well beyond ex-convicts and Burlington residents.  As I read through all the posts online, a recurring thread made itself clear. Our father was well-respected, admired and loved for his fairness, his compassion, and his respectful manner to those he both served and worked with.

He was cherished by so many friends, friends from throughout his life, from his school days to the present.

A police colleague of his posted the following quote attributed to Albert Camus on  our father’s Facebook page:

“Don’t walk in front of me… I may not follow.

Don’t walk behind me… I may not lead.

Walk beside me… just be my friend.”

Then he thanked him for being his friend for over 40 years. Big Al was everybody’s friend, I don’t think any other descriptor could please him more. He was a good man and a good friend, always ready to lend his help to whoever needed it without any expectations in return.

He may have given all the credit to our mother for raising us, but he has been an example to us in so many ways, especially on how to be a good friend, a loving parent, and compassionate person.

If any one of us can garner half the love, respect or admiration my father has been graced with, we should consider ourselves extremely fortunate.

Share Your Memory of
Alfred
Upload Your Memory View All Memories
Be the first to upload a memory!