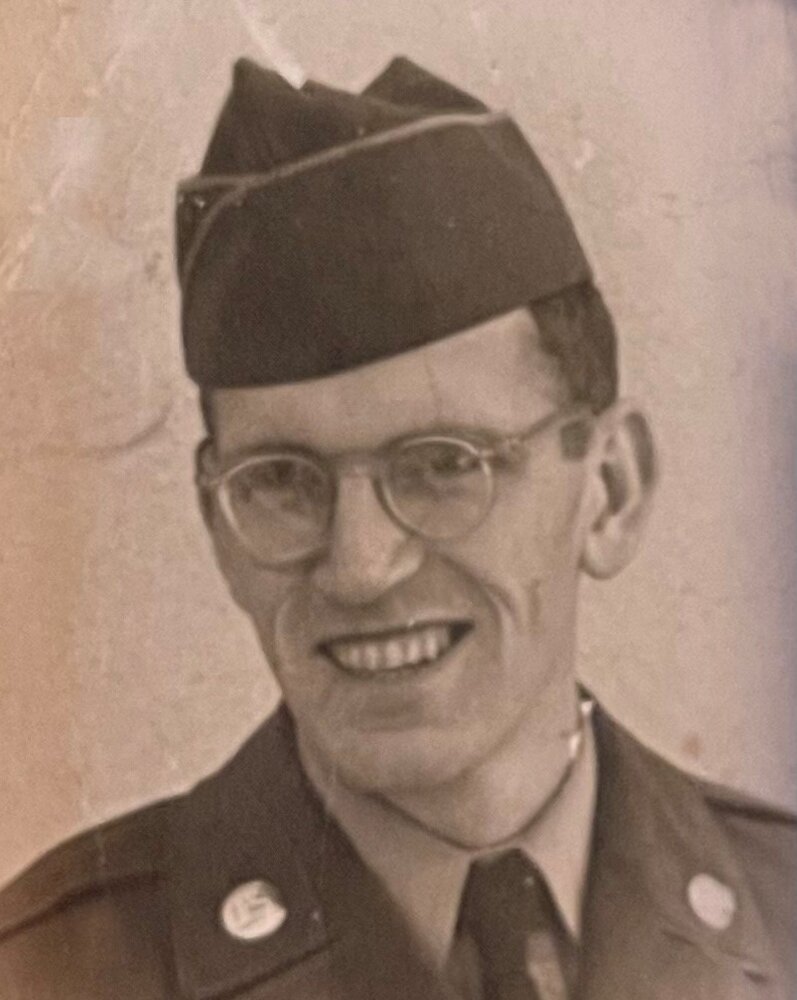 With heavy hearts we wish to announce that Gerry Davoren Buzzell passed away after a short illness on Saturday, December 18, 2021.  He was 92 years old.

Gerry was born in Sherman Mills, Maine.  He was the son of Mildred Grace Buzzell.  His mother passed when he was seven years old, and he was sent to the Good Will Hinckley School in Hinckley Maine to live and be educated.  He was an exceptional student and graduated high school at the age of 15. He returned to live on his cousin’s farm until going off to college at the University of Maine where he majored in Electrical Engineering. He spent 2 years at U Maine before enlisting in the Army during the Korean War.  He held the rank of Corporal in the Army’s 37th Infantry Division.  He spent most of his time in Germany as a radio operator and was trained to intercept Russian communications; a job which he patriotically and impeccably accomplished.  He was the recipient of the Army of the Occupation Medal and was discharged honorably in 1953. He returned to U Maine after his 2 years in the Army and finished his education earning a degree in Electrical Engineering.  From his teenage years on he always worked to support himself.  His first post college job was with the Acadia Telephone Company in Maine.  He married his college sweetheart, Madeline Irish, in 1954 and they decided that moving to Massachusetts would be the best move for Gerry’s career.  So, they lived in Everett and Arlington before settling in Burlington in 1962.  During his nearly 30-year career working for Imlac Corporation, he built and designed mainframe computers prior to the days of PC’s. After retiring, he went back to school at the University of Lowell, studying a variety of computer languages. His whole life, he never stopped learning. Post retirement, he continued to work part time up until the age of 90 at Youville Place in Lexington MA, an assisted living facility. He worked the front desk and, in the IT Dept, often working remotely from home.

Gerry, growing up an only child and being orphaned at the age of seven, wanted to have a large family so that his children would have siblings to enjoy the childhood that he never had.  Gerry and Maddie eventually stopped at 7 children and their legacy continued with seven grandchildren and eight great grandchildren.  Being a family-oriented man he shared his love of the outdoors with his children, taking them fishing, hiking, and mountain climbing.  With such a big family, family vacations were camping trips at Baxter State Park and Whetstone Falls in Maine, among many other places in northern New England.  During the day the older children went off on adventures with Gerry and the younger children visited the many relatives who lived nearby with their mother, Maddie.  He never took any family event for granted and wanted to provide for his children as a strong and nurturing father and provider.  After work and on weekends, he would spend hours working in his vegetable garden and then sharing his harvest with his family and friends.  Gerry was truly a self-made, imaginative man.  He worked hard for everything he attained and was happy to do so. His legacy is his family and the love and care that he so generously shared with everyone who knew him.

At Gerry’s request, funeral services will be private.  If you would like to remember Gerry and support the school that was so important in shaping his life, donations may be made to the Good Will Hinckley School, www.gwh.org, P.O. Box 159, Hinckley, Maine 04944.

Share Your Memory of
Gerry
Upload Your Memory View All Memories
Be the first to upload a memory!