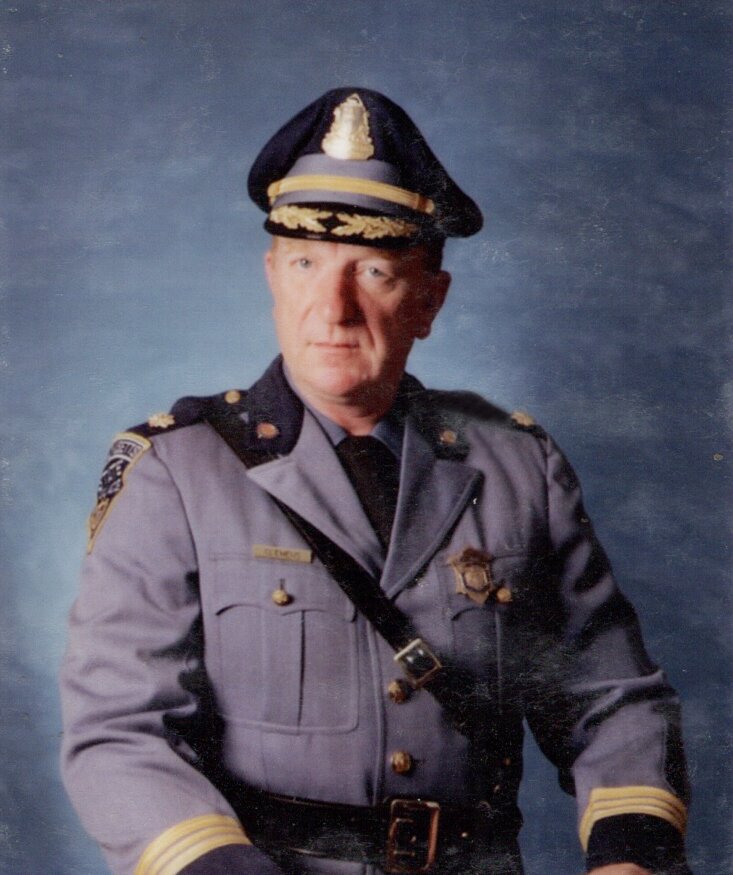 Obituary of John B Clemens

Clicking on the link (above) will bring you to our facebook page (sign-in is NOT required).  A live-stream of the funeral mass will begin shortly before 10am on Thursday, December 30th.

John “Red” Clemens, Retired Major in the Massachusetts State Police passed away peacefully at his home surrounded by family on Sunday morning December 26, 2021. He was 94 years old.  John was born in East Boston, the son of Edward and Helen Clemens.  He grew up in East Boston and attended Boston English High School.   At the age of 17, he left school to enlist in the Navy and fight in WWII.  He held the rank of Machinist Mate 3rd Class on a destroyer escort.  After the war he served on the USS Midway as a Machinist Mate.  Upon discharge from the Navy, he returned to school at Manter Hall Preparatory School in Boston to complete his education.  He was accepted at several colleges where he planned to play hockey but while in school had signed a two year note to purchase a variety store he named Red’s Variety, on Meridian Street in East Boston; this kept him from attending college.

In 1950 after selling Red’s Variety, he worked in the shipyard in the mold loft where they made templates out of wood for the metal shop to create parts for ship building.  In 1953 he entered the Massachusetts State Police Academy.  He started his career as a trooper assigned to the Charlton barracks and quickly moved up the ranks to become Captain at Logan airport then onto Major at General Headquarters in Boston.

In 1954 he married Margaret Mahoney and they welcomed their first son in 1955.  While expecting their second child, their East Boston apartment and all their belongings were destroyed by fire; this brought about their move “up country” to Billerica.  As John and Margaret’s family continued to grow with the arrival of 6 more children, so did the family home with multiple additions including a large swimming pool.  He built a home where all his immediate and extended family could gather; it was his favorite place to be.

John led by example, he was ambitious and had a strong work ethic.  He furthered his education at Middlesex Community College and studied intently for all his State Police promotional exams to continually move up in rank.  He encouraged his children and grandchildren to work hard and do well in school.

After retiring from the State Police in 1977 he began his second career at Digital Equipment Corporation as a Senior Security Investigator.  He traveled worldwide conducting investigations at company facilities.  In 1990 he retired from Digital and for a short time worked as an investigator for an environment law firm investigating hazardous waste sites for the EPA.   In 1995, at the age of 68, he obtained a private detective license and started his own firm, Putnam Associates.  He worked for criminal attorneys in the Lowell and Lawrence area as well as for the Committee for Public Counsel Services which represented indigent defendants.  He gave up his private detective license in 2007 at the age of 80.

While he enjoyed varied and exciting careers, his true passion was his family. All his leisure time was devoted to them.

John and his wife Margaret had eight children.  Despite very demanding careers and work schedules, you could always find John coaching his sons’ Little League teams, taking his kids along with neighborhood kids fishing and to the drive-in.  He also loved taking his children to sporting events and never missed an opportunity to cheer his children and grandchildren from the stands.

His sole hobby was family.  His home, especially his backyard and pool, was the family gathering spot for all occasions.   He was extremely handy around the house and rarely enlisted outside help for a repair.  He had an extremely quick wit and was known to be a bit of a prankster.  He had a strong Catholic faith. He was a member of the Knights of Columbus and was a faithful supporter of Mass Citizens for Life and Heartbeat.  He had a long and fulfilling life filled with many achievements but his proudest accomplishment was his family.

Visiting hours will be held at the Edward V Sullivan Funeral Home, 43 Winn St., Burlington on Wednesday, Dec. 29 from 4-8 p.m. Funeral from the Funeral Home on Thursday, Dec. 30 at 9 a.m. followed by a Mass of Christian Burial at St. Margaret’s Church in St. Veronica Parish, www.stveronicama.org, 111 Winn St., Burlington at 10 a.m.  Interment will be in Fox Hill Cemetery, Billerica. In lieu of flowers memorials in John’s name may be made to Heartbeat, 113 Winn St., Burlington, MA 01803 www.pregnancyma.com   The family requests that people attending the wake please wear masks and the church requires masks be worn at the funeral mass.    For directions, obituary, online guestbook & memorial video see www.sullivanfuneralhome.net